Share All sharing options for: Quick and Dirty: Phillies 3, Mets 2

The Phillies stretched their winning streak to 11 games and reduced their magic number to clinch everything clinchable--the NL East, the best record in the league, and homefield advantage throughout the post-season--with the same formula they used this week to sweep the reeling Braves and the same one they'll probably have to rely upon however far they get in October: superior starting pitching, just enough offense and solid late-inning relief. Tonight the defeated foe was the Mets, and the final score 3-2. The Phils handled business in a crisp two hours and change.

Forty-eight hours after Roy Oswalt went seven innings in the 1-0 series-ender against Atlanta before giving way to Ryan Madson and Brad Lidge for the last two frames (and seventy-two after Roy Halladay did the same in a 5-3 win), Joe Blanton followed suit: seven innings pitched, six hits, two runs--both on an Angel Pagan two-run homer in the fourth--one walk, six strikeouts. He left with the lead thanks to Shane Victorino's first-inning solo homer and second-inning RBI double and a run the Phils scratched out in the bottom of the fourth when Raul Ibanez singled, moved to second on an errant knuckleball thrown by Mets starter R.A. Dickey, and scored on a Carlos Ruiz single down the first base line.

Big Joe threw just 74 pitches thru seven, but with the divisional finish line in sight (and the top of the Mets order due in the eighth), Charlie Manuel went to the whip and brought in Madson, making his third straight appearance, fourth in the last five, eighth in the last thirteen and 32nd in the team's last 54 games. And why not? The guy's been great, with an 0.56 ERA over those 32 games, during which the team has gone 28-4. Tonight he got Jose Reyes to foul out, then struck out Lucas Duda and Carlos Beltran.

Lidge wasn't quite as dominant. He got David Wright to ground out to short to start the ninth, but then surrendered a double off the left-field wall from impressive Mets rookie Ike Davis. Pagan flied out to deep center, moving Davis to third with two outs. After Josh Thole walked, Jerry Manuel called on Jesus Feliciano to pinch-hit. The game seemed over when, with one strike, he grounded back to the mound--but time had been called just before the pitch was thrown.  Undeterred, Lidge struck out Feliciano on a slider in the dirt to end it.

With the Braves down four in the eighth in Washington, the Phils could clinch as early as tomorrow. Kyle Kendrick gets the ball against Mets rookie Dillon Gee. 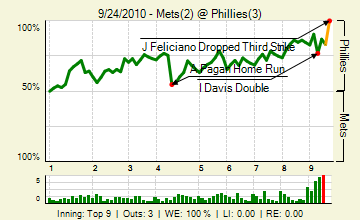