If you were going to pick a game of the current handful in which a scalding hot Phillies team might finally cool down and lose one, tonight's contest would have been a likely candidate: Kyle Kendrick on the mound, facing a Mets rookie, Dillon Gee, the team had never seen before. But while the outcome might have been foreseeable, as the Phils lost for the first time since a 4-3 defeat in Queens two weeks earlier, how it happened was fairly unlikely.

The Phils staked Kendrick to a 2-0 lead in the first inning when, with Chase Utley at first, Ryan Howard connected off Gee for a looooong home run that might have been expected to unnerve a young pitcher getting his first road taste of pennant-drive baseball. But Gee bounced back to throw an additional 6.1 innings of scoreless baseball, holding the Phils to just three more hits and two walks while striking out five.

Kendrick protected the lead through six extremely crisp scoreless innings, with no Mets hitter getting past first base to that point. In the seventh, though, it all came apart, for reasons not entirely Kendrick's fault. Carlos Beltran led off with a single and was forced at second on a David Wright fielder's choice. But Ike Davis, who came into the game with three-hit and four-hit performances in his previous three games against the Phillies, singled to center, pushing Wright to second. Angel Pagan followed with a hard grounder right at Howard--who played it indecisively, getting eaten up by a hop and watching it deflect off him into right field, loading the bases. Josh Thole then singled to shallow right, scoring Wright and reloading the bases.

That was it for Kendrick, who gave way to Chad Durbin. Rookie Lucas Duda came up to face him, pinch-hitting for Ruben Tejada. After falling behind 1-0, Durbin hung a slider that Duda ripped up the alley to the right field wall for a bases-clearing double. He scored two batters later on a Jose Reyes triple. Elmer Dessens and Hisanori Takahashi finished up with a scoreless inning of relief each for the Mets, who broke their own six-game losing streak as well as the Phils' run of 11 straight wins.

So the magic number remains at two, as the Braves beat the Nationals earlier. Cole Hamels hopes to shrink it Sunday when he takes the mound in the series finale against Mets lefty Pat Misch. 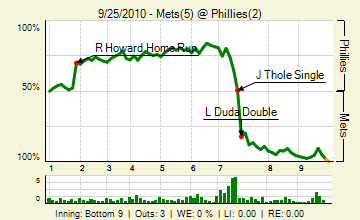