The Phillies concluded their regular season home schedule on a down note today, dropping the final game of the three game weekend series to the Mets by a score of 7-3.

Cole Hamels, who had been magnificent for most of the last three months, pitched poorly today, and became visibly frustrated with home plate umpire Mike Winters on some close calls, resulting in some wonderful Human Elementing of the game from the vindictive umpire on some subsequent pitches.  The lefthander surrendered five runs in just four innings pitched, including home runs by David Wright and Carlos Beltran.  He allowed nine hits and walked three.

The Phillies were also victimized by some stellar defensive play from the Mets outfield with runners on base, including a terrific diving catch by Carlos Beltran in the sixth, and a sliding grab from Nick Evans in the seventh.

Chase Utley made the game interesting with a three run homer in the fifth inning, bringing the Phillies to within two runs.  The Mets all but put the game out of reach in the top of the ninth on a two run homer from Carlos Beltran, his second blast of the day.

The loss also clinches another sub-100 victory season.  The Phillies have not won 100 games since 1977.

It wasn't all bad news, as the Atlanta Braves lost to the Washington Nationals by a score of 4-2, decreasing the Phillies' Magic Number to 1 and allowing the Phillies to clinch a tie for the NL East crown. 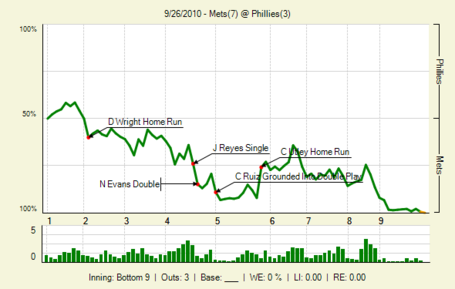