On a rainy night in the nation's capital, the Phillies locked up their fourth straight National League East crown tonight behind the masterful pitching of Roy Halladay, and some timely hitting from some of the lineup stalwarts.

Halladay was masterful once again, needing just 97 pitches to complete a two-hit shutout of the Washington Nationals.  He struck out six and walked none, facing just one hitter over the minimum en route to his 21st victory on the season and putting some pretty serious eyebrows on his claim for the National League Cy Young Award.

Not much else to say right now.  Look upon my Fangraph, ye mighty, and despair! 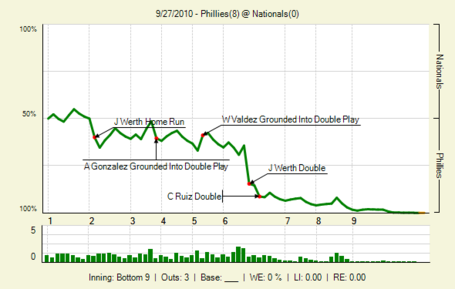