Share All sharing options for: Cole on Top: Phillies 1, Brewers 0

Cole Hamels is on the mound, so you know there's a great chance of Phillies offensive ineptitude.  However, for once, the left-hander found himself on the winning end of the equation.

Hamels held the Brewers to just three hits and three walks in seven innings, striking out seven in the process.  He faced the minimum through five innings despite a hit and a walk thanks to a couple of double plays.  He only really ran into trouble in his final frame, allowing a leadoff walk to Ryan Braun and a single to Prince Fielder to put two runners on with no outs.  He proceeded to retire the next three Brewers batters without incident.

The Phillies sole run came on an RBI groundout by catcher Carlos Ruiz, which was made possible only thanks to a botched fly ball by left fielder Braun and center fielder Lorenzo Cain that turned into a double for Shane Victorino, who advanced to third on a Raul Ibanez groundout.

In the bottom of the fourth, the Phillies loaded the bases with no one out, but came away empty handed after an Ibanez strikeout and a line-drive double play from Ruiz.

Jose Contreras pitched a perfect eighth inning, striking out two, and Ryan Madson -- death to so many Cole Hamels victories -- pitched a 1-2-3 ninth for his fifth save of the season. 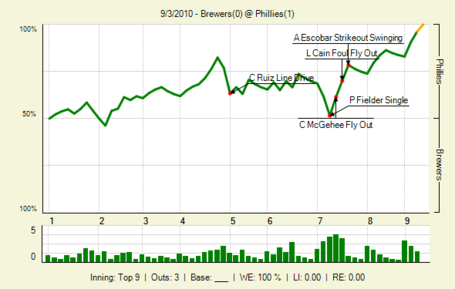