At Citizens Bank Park on Saturday night, Roy Halladay had one of those nights about which other pitchers must have warned him when first Doc set his heart on joining the Phillies: he allowed four home runs in the game for the first time in his career, probably two, maybe three of which would have been homers in most other venues. But shockingly, considering the non-support he's so often gotten from his mates in 2010, Halladay earned the win anyway, as the Phils found a few different ways to score against the Brewers in a comeback 5-4 win.

Their last two runs came on one sacrifice fly to shallow left by Placido Polanco in the bottom of the seventh, as Carlos Ruiz raced home ahead of a Ryan Braun that bounced away from catcher Jonathan Lucroy--and Wilson Valdez, who'd walked when sent up to pinch-hit and presumably sacrifice for Halladay, crossed the plate behind Ruiz to give the Phils a 5-4 advantage they would successfully defend.

The two runs got Halladay off the hook from the second solo homer he'd allowed to Corey Hart in the top of the seventh, following solo bombs surrendered in the top of the second inning to Prince Fielder and Alcides Escobar. The Phils had pulled even in the bottom of the inning behind back-to-back bombs from Ryan Howard and Jayson Werth off Brewers starter and Philly-area homeboy Dave Bush. Milwaukee had gone ahead again in the third on Hart's first home run, with the Phillies tying the score at 3 immediately after as Chase Utley singled in Jimmy Rollins.

After Valdez's baserunning derring-do, three Phillies relievers closed out the Brewers in order. J.C. Romero retired Fielder to start the Milwaukee eighth, then gave way to Ryan Madson who set down Casey McGehee and Chris Dickerson. Brad Lidge finished things off for his 20th save of 2010 by inducing an Escobar groundout, striking out pinch-hitter Mat Gamel and getting pinch-hitter George Kotteras to fly out to deep center.

As the Braves turned aside the Marlins 2-0 in Miami, the Phils remain a game off the pace in the NL East, but stretch their wild-card lead to 3.5 games pending the Giants-Dodgers contest later on. 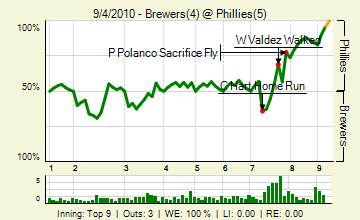