Share All sharing options for: Devoured By Wolf: Brewers 6, Phillies 2

Up against their former lefty "ace," the Phillies dropped a deuce.  By that I mean they only scored two runs, en route to a 6-2 defeat in the final game of the season against the Milwaukee Brewers.

Scott Mathieson made his first appearance for the Phillies since June, allowing an unearned run due to an error by first baseman Ryan Howard.

The game was not without questionable moves from Phillies skipper Charlie Manuel.  Notably, the decision to use Mathieson in a close, pressure situation, in addition to not pinch-hitting for left fielder Ben Francisco in the eighth inning, with runners on first and second and representing the tying run against righty reliever John Axford.    Francisco flied out to right, effectively ending the day for the Phillies.

Both Phillies runs scored in the bottom of the second inning on a two-RBI double from Carlos Ruiz.

With the Braves ten inning loss to the Marlins in Florida, the Phillies remain just a game back in the NL East. 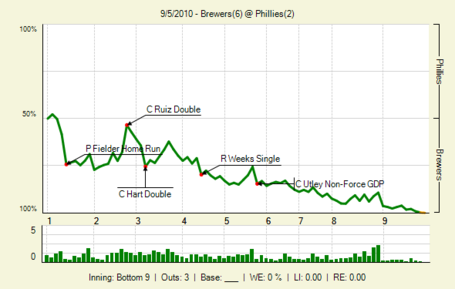