On a day when America honors its working women and men by giving (most of them) the day off, the Phillies lineup followed suit. Facing Marlins starter Adalberto Mendez, a 28 year old rookie making his major league debut, the Phils managed one single in six innings, off the bat of Brian Schneider in the second; Mendez might have gone further, but hurt himself in the top of the seventh rounding first after notching the first base hit of his big-league career.

Thus unsupported, Phils rookie Vance Worley lost his first big-league start despite turning in a solid performance: five innings, two runs, six hits, a walk, five strikeouts. Worley surrendered an RBI single to Dan Uggla in the first inning and a solo homer to Chad Tracy in the second; otherwise he kept the Marlins at bay and his team in the game. With pitching coach Rich Dubee evidently steamed at struggling Kyle Kendrick, it will be interesting to see if Worley's work earns him a second spin in the rotation next weekend against the Mets.

Relievers David Herndon and Antonio Bastardo kept the game at 2-0 into the eighth, waiting in vain for the Phillies' bats to wake up. But Chad Durbin dampened the possibilities of a comeback by allowing a two-out, two-run homer to Florida rookie Mike Stanton in the eighth, then Mike Zagurski surrendered three in the ninth to put it out of reach. The Phils managed to avoid both the shutout and suffering their, I dunno, let's say 17th one-hitter of 2010 when Ryan Howard doubled to lead off the ninth, then scored on Jayson Werth's single. Thrilling, no doubt, for those left in attendance from the season's biggest crowd.

They do it again in a few hours as Roy Oswalt faces Anibal Sanchez. 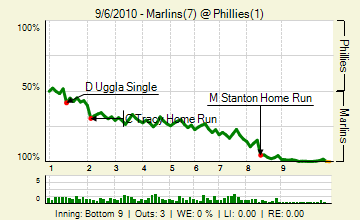