Share All sharing options for: Welcome to Splitsville. Population: You - Phillies 7, Marlins 4

The Phillies held on despite a less-than-stellar outing from Roy Oswalt en route to a 7-4 victory over the Florida Marlins, and a split of their Labor Day doubleheader.

Much like his fellow Rotation Roy in his last start, Oswalt's weakness tonight was the long ball, surrendering three of them on the night, including an absolute blast from Marlins rookie Mike Stanton, and a pair of wall-scrapers from Hanley Ramirez and Cameron Maybin.  Oswalt struck out seven and walked just one in seven full innings pitched.

On the flip side, the Phillies scored their seven runs without the benefit of a single home run.  The Phillies plated five runs in the bottom of the second off Marlins starter Anibal Sanchez, with the top three in the Phillies' order pulling most of the weight (7-for-13, 5 RBI).

The Phillies bullpen was sharp once again, with Ryan Madson retiring three in a row in the top of the eighth after a leadoff walk from J.C. Romero.  Brad Lidge pitched a scoreless ninth for his 21st Save, lowering his season ERA (yes, I know, bad stat for relievers) to 3.38.

With the victory, the Phillies climb to within one half game of the Braves in the NL East (although they still sit a game back in the loss column). 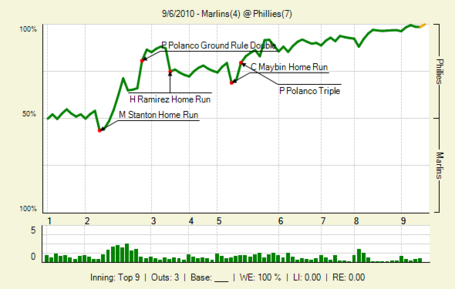