Back In the High Life Again: Phillies 8, Marlins 7

Share All sharing options for: Back In the High Life Again: Phillies 8, Marlins 7

And just like that, with a Braves loss (in Pittsburgh no less, with Tim Hudson pitching), and a sloppy win against a tough Marlins team, the Phillies reclaim sole possession of first place for the first time since May, and become the first National League team to 80 victories in 2010.

It wasn't pretty.  Three of the Marlins' seven runs were unearned, thanks to a Joe Blanton error in the third inning that was really kinda Ryan Howard's fault due to his inability to throw to second, and a horrendous "WTF?" throw from right field "to" "third base" from Jayson Werth that allowed Marlins catcher Brad Davis to score in the eighth inning.  The Marlins then tied the game on a Ryan Madson wild pitch later that frame.  But the Phillies took the lead for good in the bottom of the eighth after a Shane Victorino stolen base, then an RBI single from Placido Polanco.

Joe Blanton was, again, "Average Joe," allowing four runs (only two earned) over 6.1 innings, striking out five.  The bullpen allowed three runs, all charged to Jose Contreras, but as documented above, there was plenty of blame to go around.  Oh, and Ryan Madson got a blown save AND the win in that game.  Got it?  KILL THE SAVE STAT.

The offensive star of the night was Raul Ibanez, who came just a double short of hitting for the cycle. 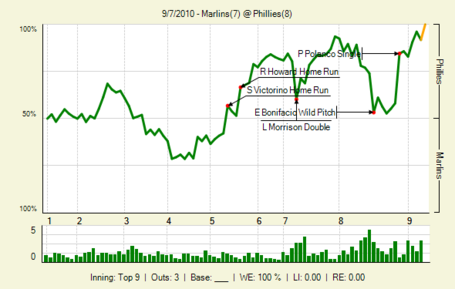