Cole gets something in his stocking: Phillies 10, Marlins 6

Share All sharing options for: Cole gets something in his stocking: Phillies 10, Marlins 6

The beautiful thing about this new look, frontline pitching-led Phillies squad is that they have the starting pitching advantage more often than not. A night after wresting back the division lead from the Braves for the first time in over three months, it must have been comforting for Charlie Manuel to be able to hand the ball to Cole Hamels (and his 3.21 SIERA) to face Andrew Miller (and his 5.00 SIERA and Megan's Law facial hair) as the Fightins sought to maintain that division lead.

To virtually no one's surprise, Hamels was once again excellent; he allowed just 5 baserunners over 7 scoreless innings while whiffing 5. But to my surprise -- and, I'm sure, the surprise of anyone who's watched the Phillies this year -- the offense decided to back up their lefty change up artist for once.

The bats put runs on the board in each of the first five innings en route to an eventual 10-0 lead. Ryan Howard started things off with an RBI single in the 1st, closed the Phils' scoring with another RBI single in the 7th, and walloped a 3-run homer to left field in the 4th inning as the meat on the sandwich. That makes the big guy 11-for-34 this month with 5 homers and a tidy .324/.395/.765 line. Isn't September Ryan Howard just swell?

Chase Utley jumped into the act with a 2-for-3 night including a pair of RBIs and a walk, Shane Victorino had a pair of doubles as part of a 3-for-6 night, and Raul Ibanez went 2-for-4. The double digit outburst was the most support Hamels has gotten since June, and helped deliver him his long-awaited 10th win of the season.

It wasn't all sunshine and lollipops, however, as Jimmy Rollins pulled up with a bum hamstring while scoring in the 3rd inning and was replaced by Wilson Valdez. He's been labeled day-to-day for now, but with the nagging injuries Rollins has put up with this year, it's natural to be a little wary of the situation. Additionally, Nate Robertson showed that his 5.45 ERA this year was no fluke (and further drove home the point that this performance was) by making this game interesting down the stretch, inviting the Fish to put a 6-spot on the board in the 8th. The ensuing chain of events led Charlie Manuel to call on Ryan Madson for what felt like the 8th time in the last 4 days. Tomorrow's day off should certainly be a welcome one for the lanky righty.

The Braves finally righted the ship out in Pittsburgh with a 9-3 win, so the Phils' lead stays at a half-game. Additionally, if you're into the whole scoreboard watching thing, the Giants lost 3-1 to Dan Hudson and the D'backs, while the Padres currently lead the Dodgers behind rookie Cory Luebke. 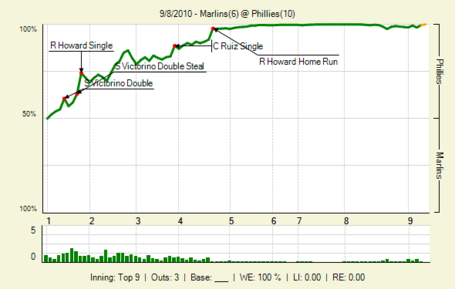 via www.fangraphs.com (Kind of amazing that Robertson barely put a dent in it, huh?)