Share All sharing options for: He's Got This: Phillies 11, Cardinals 6

Roy Halladay settled in after allowing a three run home run to Lance Berkman in the top of the first inning, retiring the final 21 batters he faced after allowing a leadoff single in the second, and the Phillies exploded for 11 runs in the sixth, seventh, and eighth innings en route to an 11-6 victory over the St. Louis Cardinals, and a 1-0 series lead in the National League Division Series.

From the second through eighth innings, Halladay was just as dominant as he was in last year's NLDS Game One against the Reds, allowing just a single flyball out, striking out eight, and cruising despite the Cardinals holding a lead for most of the night.

Cardinals starter Kyle Lohse started brilliantly, keeping the Phillies off the board for the first three innings and allowing just an unearned run in the fourth after Cardinals third baseman David Freese dropped a two out foul pop from Shane Victorino, who would then single in a run.

Things really fell apart from for Lohse in the sixth however. With one out and runners on first and second, Cardinals manager Tony LaRussa chose to leave Lohse in the game to face Ryan Howard rather than swap in a lefty reliever. LaRussa chose... Poorly. 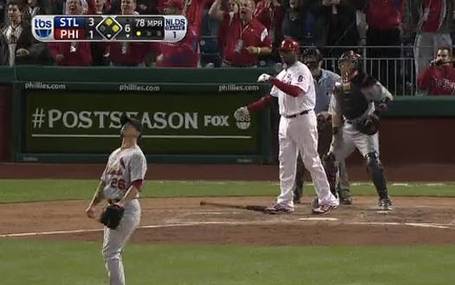 Boom. Upper deck blast from Howard on a full count to give the Phillies a 4-3 lead.

Shane Victorino would single, and Raul Ibanez would follow up with another smash home run to extend the lead to 6-3.

The Phillies would add on in the seventh with a Ryan Howard sacrifice fly and RBI singles from Shane Victorino and Raul Ibanez, and two more in the eighth thanks to a two-run single from Hunter Pence.

The Cardinals would score three garbage time runs in the ninth off Michael Stutes, who did not exactly look postseason ready but honestly that's like complaining that the free ice cream cone is too small.  Ryan Madson struck out pinch hitter Matt Holliday to close it out.