WholeCamels has covered Raul Ibanez' hot-and-cold tenure with the Phillies, but it's worth noting that his 3-year stint here capped a remarkable decade.

Compare Raul's pre-30 stats above to those of another late bloomer, through his age 29 season in 2008:

Ibanez even makes Werth look like a precocious overachiever by comparison.

However despite his inauspicious start, and while he had not played full-time yet, his 2001 season (.280/.353/.495) showed there was some hope he could still be a major league hitter...

Over the decade to come Raul would accomplish the following among players in their 30s in all of baseball history:

He accomplished this in large part due to his durability:

8th most games played, 11th most PAs, 9th most ABs

There was nothing spectacular in this decade (see his stats below, or at BB-Ref).  The only category he ever led the league in was Games Played in 2005, and his most impressive stat was his 123 RBIs (3rd in the AL) in 2006. His top 10 finishes:

Ibanez' OPS of .823 in his 30s only ranks 121st  in history for that age group, but consider some of those who are below him:

One other notable accomplishment is that he joined the short list of players who hit 30 or more doubles in 10 consecutive seasons (as reported at BoopStats): 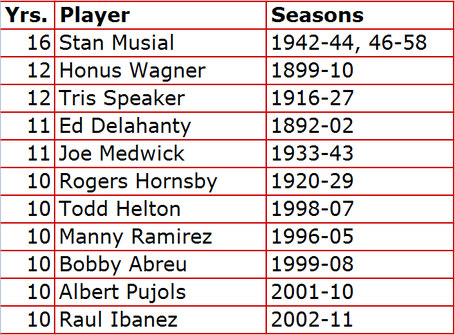 (By the way, Pujols finished with 29 doubles in 2011, as well as 99 RBIs and a .299 batting average, breaking 10-year streaks in all three categories.  Even when he fails he does it with style.)

A player's 30's are the 2nd half of their productive years -- typically less than half, and typically less productive, but we are not talking about the small number of freaks of nature who are productive into their 40s.  Ibanez rose to the top tiers in several categories in the 30-39 age group by surpassing many of  the best players in the game.

He may yet become one of those freaks playing well into his 40s, and many Phillies fans will be following him with interest wherever his end-of-career travels take him. 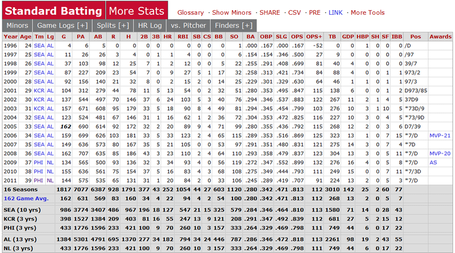