Share All sharing options for: Flip the Script: Cardinals 5, Phillies 4

For future reference: Don't score three runs in the first inning. You will lose the game.

Tonight, it was the Phillies who jumped out to a quick 3-0 lead in the first, adding on a fourth run in the second inning, only to not score again while the Cardinals chipped away off Cliff Lee, as the Cardinals claimed game two of the National League Division Series by a score of 5-4, evening the series at one game a piece.

Remember Cliff Lee in April and May? The guy who got a zillion strikeouts but every ball in play seemed to fall in for a hit? Yeah, that's the Cliff we got tonight. The Cardinals had a team batting average on balls in play of .542 tonight, and .600 off of Cliff Lee. Do you know how cuckoo bananas that is? Lee surrendered twelve hits in six innings pitched, striking out nine and walking two. You can bang the "unsustainable" drum all you want, but in a five game series, you can't afford to lose many unlucky games. So this was pretty bad.

Chris Carpenter started for the Cardinals and did a terrible job. Too bad he didn't stick around longer, because the vaunted Cardinals bullpen combined to go allow just one hit and one hit batsman in six innings of work. That horrible Cardinals bullpen.

Both sides were flummoxed by an erratic (read: piece of garbage) strike zone from home plate umpire Jerry Meals. If you want a recap of Meals' 2011 exploits, just Google "Jerry Meals."

A nice, long day off tomorrow to stew, and then on to St. Louis for Game Three on Tuesday. Good night. 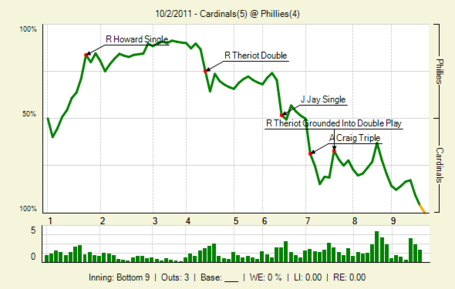