Share All sharing options for: It's Never Easy: Phillies 3, Cardinals 2

"It's the Phillies. If it was easy, they wouldn't be the Phillies." My dad has said that to me a lot in the past few years. As a lifelong fan of the Phillies, he would know, having lived through some of the dark, dark days of the franchise. I heard his voice a lot tonight as the Phillies struggled and clawed against the Cardinals to make the series 2-1 in their favor with a score of 3-2. At no point was this an easy or routine victory. But they got there.

From the beginning, it was one of those games. During the regular season, the type of game played tonight would be stressful to watch, but only until you realized that it was just one game out of 162. But it's not the regular season anymore. It's the postseason. Through five innings, they had one two-ball count and one three-ball count. And they were during the same at bat (thank you, Chooch!) The Phillies being held to two hits through six innings is borderline catastrophic. (They were in fact held to two hits through six innings, and it was just as painful as you'd expect.)

Our Fightin' Phils limited their runs to just one inning, scoring three in the seventh on a three-run pinch hit home run hit by none other than Ben Francisco. Benny hit .345 in the month of September, and has been a good option off the bench lately. When he came to the plate, I was actually pretty optimistic. And considering how insanely stressed and insane I was at the time, that's saying quite a lot. The Cardinals got one in the seventh off Vance "Pants Dance Chance!" Worley (that nickname might be something only I call him), and one off Ryan Madson in the ninth. Madson induced a double play after Lidge allowed two hits to load the bases in the eighth. He'd stay on to save it in the ninth for his first five-out save of the season.

In the end, despite Jaime Garcia's dominant performance (and he was very good), the Phillies were able to push ahead and hold off the Cardinals. Cole Hamels, despite not being his sharpest, got the win after pitching six innings, giving up five hits, three walks, and striking out eight. And the Phillies, despite throwing away at-bats like they have 80 or 90 per game, laid down hits and scored runs when it counted.

I won't lie, watching the Phillies tonight wasn't an easy task. Surviving their at-bats was a herculean effort. Watching their hard-hit balls find fielders required more beer than I had on hand.  Last week, I wrote about my baseball superstitions. That was my way of telling the world that I do not deal with the postseason particularly well. When every single thing means so much more, I start taking giant hunks of my lady hair in my hands and pulling at it like a crazed maniac. At no point tonight could I just sit still and enjoy the game. "Enjoy." I couldn't barely watch the game, let alone "enjoy" it, whatever that means. There is only one goal of the postseason, and watching your team try to get there, especially when the expectations are so high, can be absolutely excruciating.

I'll talk to my dad tomorrow about the game, and no doubt he'll tell me that the challenge of these games is part of the journey to the ultimate goal. And then I'll give him the address of the loony bin where I've been admitted for treatment and experimental testing.

Fangraph of Stress and Insanity: 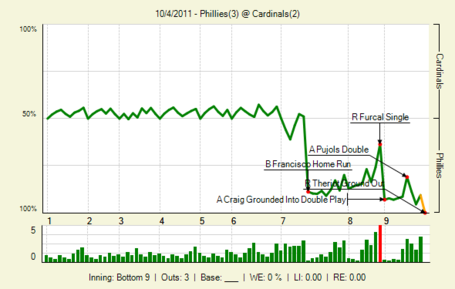