When the Phillies started their magical run in 2007, I was a consultant, and when October came, so ecstatic was I to see my favorite team in the playoffs for the first time since before I could legally drink that I thought nothing of rearranging my fairly loose schedule to make sure I could watch every game. This was the case in 2008 and 2009 as well; I was locked in for every pitch, and probably made an appreciable contribution to the fourth-quarter profits of certain breweries and distributorships. Then in 2010 I got a real big-boy dress-up-and-work-full-days kind of job, and this October I have a different one.

I mention this because this evening I didn't get home until a bit before 7pm Eastern time, meaning that I missed the first two and a half innings of NLDS Game Four. When I turned it on, the Phillies were leading the Cardinals 2-1. Good enough... but as I understand it, the club had a golden opportunity to deliver the kill shot to the Cards in the first inning, and couldn't come through. Jimmy Rollins led off with a double. Chase Utley followed with a triple; 1-0 Phils.Hunter Pence scored Utley with a single to make it 2-0... and then it all went to hell. Ryan Howard was backwards-K'd on a pitch I'm informed was not a strike, and Pence was called out at second on a play I'm told he was safe. Two in, but two outs, none on, and a desperately needed reprieve for St. Louis starter Edwin Jackson.

St. Louis got one back in the bottom of the first against Roy Oswalt, on a double by his former teammate Lance Berkman, and went ahead in the fourth on a two-run double by David Freese. He later added a two-run homer that made it 5-2, finishing the game 2-3 with four runs batted in. Oswalt and two relievers held Albert Pujols to an 0 for 4, and limited the damage done by the Cardinals' other big guns, but again were beaten by the guys at the bottom of the lineup. For the series, the Cardinals' seven-hole hitters--Skip Schumaker in the first two games, Ryan Theriot yesterday, and Friese tonight--have gone a combined 10 for 16.

The Phillies' seven-hole hitter has been Placido Polanco, 2 for 16 in the series for a .125 average. Making him feel better about himself is Carlos Ruiz, at .071. Ryan Howard, who started the series so strongly, is now down to .133 after yet another late-game strikeout at the hands of a left-hander. With a man on and a run across in the eighth inning, Howard whiffed on three pitches against Marc Rzep... Rzepinsk... the lefty who isn't Arthur Rhodes (who struck out Raul Ibanez an inning earlier). Jason Motte then set the Phils down 1-2-3 in the 9th.

If you're thinking this recap reeks of despair, that's not a failure of reading comprehension. Throughout this series, the Phillies have turned in awful at-bats against less than imposing pitchers; Jackson was there to be had again and again in this game, and other than Rollins and Utley--who short-circuited a potential rally in the sixth with an overaggressive base-running move, getting thrown out at third--nobody went up with an evident clue.

Friday, they face a real pitcher: Cards ace Chris Carpenter, whom the Phils knocked around early in Game Two before the offense sunk into a slumber from which it has yet to stir. That start came on three days' rest, the first time in the former Cy Young Award winner's career he'd attempted that feat. He'll be on full rest Friday.

If there's reason for hope, it's that Carpenter will be opposed by his former Blue Jays teammate and good friend Roy Halladay. Doc also was shaky early in his first NLDS start, but rebounded to set down the last 21 hitters he faced in the Phils' series-opening 11-6 win. Unless the bats come to life, he'll have to be every bit as good for the Phillies to advance to the next round. 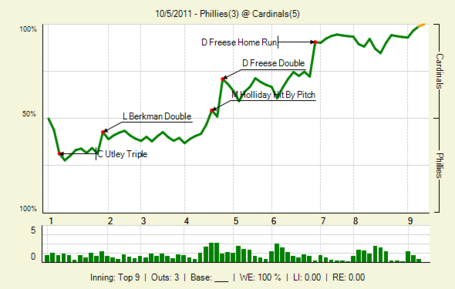