The magical 2011 season came to a sudden, helpless end tonight in Philadelphia, as Cardinals starter Chris Carpenter followed his poor Game Two performance with a brilliant Game Five clincher, going the full nine innings in a 1-0 win over the Phillies, sending them to their first NLCS since their World Championship season of 2006.

With the exception of a rough first inning, in which Halladay surrendered the game's sole run after a Rafael Furcal leadoff triple and an RBI double from Skip Schumaker, the Phillies' right-hander arguably outpitched Carpenter, but to no avail, as the Phillies offense was unable to muster more than a couple mewling threats.

Carpenter only struck out three but walked none and induced 18 groundballs. 18! Even if you're not striking people out, you'll win a lot of games that way.

Halladay, for his part, struck out seven and walked one in eight innings pitched.  Free agent-to-be Ryan Madson pitched a perfect ninth.

And for the second season in a row, the Ryan Howard found himself in the unfortunate position of making the season's final out, albeit this time on a groundout, and injured himself on the run to first base. An apt metaphor, maybe.

There will be plenty of time to unpack and reflect on this season, by most accounts a success but still a great disappointment. Please stay tuned to The Good Phight.

As your Blog Lord, I encourage you to step away and enjoy the beautiful weekend. 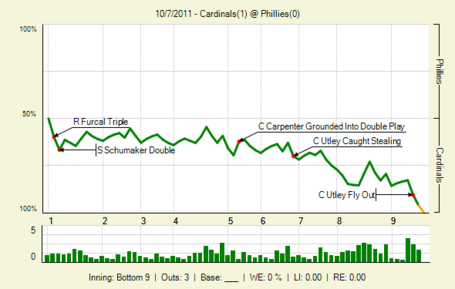