Share All sharing options for: 2011 Phillies: Highest Scoring Offense, and Higher than in 2010 or 2008 -- but Vulnerable

First, the Phillies offense I am referring to is the one with Chase Utley.  Clearly, the Phillies are a different team with Utley in the lineup than either Wilson Valdez or Michael Martinez.  Even in a subpar year for Utley, there was still no comparison betwen his hitting and that of his replacements.  There were 49 players who played 2nd base and had at least 230 plate appearances this year, and here is how Utley, Valdez, and Martinez ranked in wOBA among those 49:

Second, in comparing to other years, scoring is measured relative to the league average in each year.  There is a more in-depth analysis that can be done factoring in luck, park factors (although CBP is neutral, as has been shown here and again here), and other nuances, but this article is focused on the results -- how many runs did the Phillies actually score?

These qualifiers are reasonable because for the fans who are clamoring to blow up the team, replace hitting coach Greg Gross and/or manager Charlie Manuel, or at least have hitters change their approach (as if that were easy) it's the offense that includes Utley that is in question, and that is the offense that they took into the playoffs, banged up as it may have been.  And secondly, those fans are by and large not concerned with park factors (except for those who believe CBP is a bandbox) or with wOBAs or other advanced stats.

So, having said all that...

From the time Utley joined the team on May 23rd, through the end of the regular season, the Phillies had ...

1) The Highest Scoring Offense in the NL

Offense is down across baseball in recent years. Whether it’s the restrictions on PEDs, or improved pitching, or a combination of both, scoring in the NL has declined 12% from 2007 (4.71 per game) to this year (4.13).

A run scored in 2011 means more towards winning a game than it did in 2007, and we need to look at the Phillies’ offense in this context — how have they done relative to the league in each year?

So relative to the league, this year’s offense averaged over the entire season is 7% better than the league, not much worse than in 2008 (9% over the league).

And from the time Utley started in May, the Phillies averaged 4.63 per game, or 12% over the league average (and highest in the NL). No offense is perfect, but the Phillies have a very good one when Martinez and Valdez are kept out of the batter’s box.

While the 2010 and (less so) 2008 teams also had key players out for a time, this year's team was also without Victorino, Rollins, and Howard for stretches after Utley returned.

Much has been said about the need for the Phillies to change their approach, be more selective, work counts, and so on.  Some of the commentors have made it sound like the Phils are undisciplined free swingers, while in fact that is far from being the case.  In fact an article by David Murphy linked below indicated that they may be too selective, and too often wait for the perfect pitch, especially against pitchers who have good command.

Pitches per PA: they were at the league average (3.80) – link.  From May 23rd on they averaged 3.83, which would have been 5th in the NL.  It should be noted that there is no correlation between pitches per PA and scoring.

First Pitch Swinging: by far the lowest in the NL.

It's no surprise then that the Phillies swung at the fewest pitches in the NL, with 44% (BB-R Pitch data).  As a frame of reference, all NL teams were between 44% and 48%.

Hitter's Counts: The Phillies were generally patient and worked counts, and were among the league leaders in seeing 3-0, 2-0, and 3-1 counts (they didn't quite lead the league in spite of what the link above seems to show, because BB-R's percentages are rounded).

Strikeouts: 2nd lowest in the NL, for the second year in a row (St. Louis was lowest in both years) - link (ratios).  They also had one of the highest contact rates in the league - see the "Con" column in the Pitch data.

One possible legitimate target for changing their approach is what they do when they get ahead in the count.  The Phillies had the 5th highest swing rate at 3-0, 2-0, and 3-1,  i.e. they were generally looking for a pitch to drive, rather than to work the count and possibly get on base via a walk.   For each of these counts, they had the 8th, 6th, and 3rd highest swing rates, respectively.  The proper approach depends on the hitter and the situation obviously, but I think it's fair to say that the Phillies should be trying to get a walk more often.

This has been suggested throughout the year, and frankly I didn't buy into it, but the Phillies had trouble with better pitchers.

David Murphy had a very good article last week, in which he found a sharp difference based on the K/BB rate of the opposing starting pitcher.  There might be something to that.  I couldn't fully replicate his results, and in fact it appears the Phililes' record in games against starters with K/BB over 2.5 was 32-21, rather than the 22-30 that the article showed, but other than that the results appear valid:

I did a similar analysis based on the opposing starters' ERA, and I repeated that for each team in the NL.  I used ERA rather than SIERA or FIP because again I was looking at what actually happened.

After Utley's return, the Phillies increased their scoring about equally vs. these better pitchers (up 23%) as they did against all others (up 19%), but the 30% drop-off remained:

Note: stats are for the entire game started by that pitcher, not just the innings during which he was in the game.

Surely every team has this problem, doesn't it?  Well, sort of, and to varying degrees.  I repeated this for every team in the NL, and the Phillies' 30% drop in scoring vs. good starters was the biggest in the NL.  The next biggest was Colorado's 24%.

Teams generally played between 40 and 60 games against opposing starters who finished the season with an ERA under 3.50, and there was wide variation in how their scoring against good pitchers compared to their overall average.  From the teams like the Phillies, and then Colorado and New York, who only scored 76% and 77%, respectively, of their overall average vs. pitchers with ERAs under 3.50, to Chicago and Washington, who both actually scored MORE against pitchers with good ERAs. 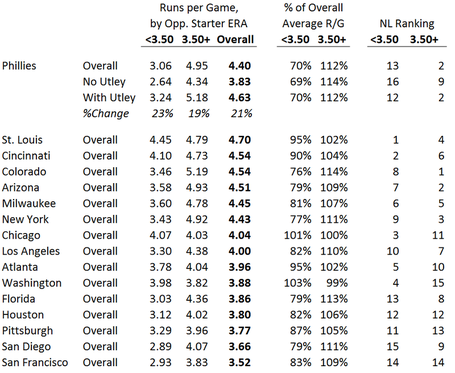 How do they correct this?  Discuss.

... is this enough of a sample size to judge skill/talent/ability with respect to facing very strong pitchers? Has this same group of guys in years past struggled against better pitchers in the same way? 47 games (even less with Utley) isn’t much at all….

I looked at how the Phillies fared in the 50 or so games against better pitchers in each year:

For an idea of what's typical, the NL average %'s in 2011 were 85% of a team's overall average vs. starters with ERAs under 3.50, and 107% vs. all others.  I'm assuming that this wouldn't vary much year-to-year even as the level of scoring changes.

So in summary:
- Even in their best offensive years in the current run (2007 and 2009), their relative performance vs. good pitchers was about the same as the league's.
- In 2008 and 2010, which were also very good years offensively, their fall-off vs. good pitchers was bigger than the league average.
- And in 2011, as we saw in the table of teams above, they had the biggest drop-off by far from their overall average.