Bandbox Schmandbox: Citizens Bank Park Is Not Playing Like A Hitter's Park

Share All sharing options for: Bandbox Schmandbox: Citizens Bank Park Is Not Playing Like A Hitter's Park

We've covered this ground before, when we reported a year ago that Citizens Bank Park had already been playing neutral for three years.

When we say a park favors hitters, what do we mean? We mean that they hit better there (score more runs, or more specifically, hit more home runs) than they would in an average ballpark. But how do we measure that? We can't simply compare the runs scored there, or the HRs hit, to other parks, because that is very much dependent on the home team. Instead, we control for the makeup of the team by comparing what happens in a team's home games with what happens in their away games, against the same teams.

A PF over one means the park favors hitters, less than 1 means it favors pitchers.

Myths die hard. Writers, commentators, and announcers have hard enough jobs without having to look up stats to confirm facts that are already established as common knowledge: Batting Average and RBIs are the most important stats for a hitter, Michael Young is a great player, and Citizens Bank Park is a bandbox -- a hitters' haven, and a pitcher's nightmare.

That last myth used to be true, if only in part. In its first 4 years, CBP was in the top 6 in HR park factor in each year, but even in most of those years it only boosted scoring (i.e. overall hitting) modestly:

However since the 2008 season, not only is CBP not boosting scoring, it also hasn't been inflating home runs.

After 4 years of the data not matching the narrative, some are beginning to notice:

"Citizens Bank Park isn't quite the bandbox it's reputed to be..." - Christina Kahrl

"A stunning tidbit in 2012 Bill James Handbook: What was the worst HR park in 2011 for RH hitters in the National League? Citizens Bank Park!" - Jayson Stark

"The park in Philly is in the middle of the pack, offensively." - Brian Kenny on MLB Network's Clubhouse Confidential

"(While Citizens Bank Ballpark in Philly has a reputation has a great hitter's park, it's actually been essentially neutral over the past several seasons.)" - David Schoenfield

However the overwhelming majority are blithely perpetuating the myth, even when describing situations where it's behaving like anything but a hitter's park:

"...Chris Carpenter ... turned Citizens Bandbox Park into the spacious and forgiving Busch Stadium that was home to Whitey's Rug Rats in the '80s." - Marty Noble

"Maybe it was the sight of his players flailing in Citizen's Bank bandbox in the first game of a potential playoff preview series." - Ann Killion

Citizens Bank Park may help certain types of batters (e.g. left-handed hitters), but for every segment that it helps, there must be equal segments that it hurts, because in aggregate it plays neutral. And, as is well known by now, it hasn't helped the most famous left-handed home run hitter to have played there -- Ryan Howard has actually hit fewer home runs at home (140) in his career, than he has on the road (146).

Below are the 4-year park factors for all 30 parks: 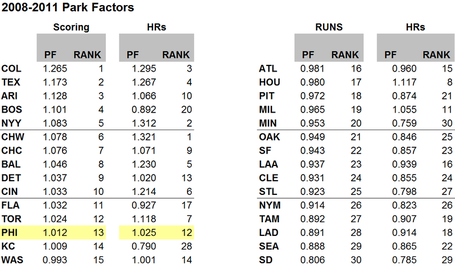 And the same data in graphical form: 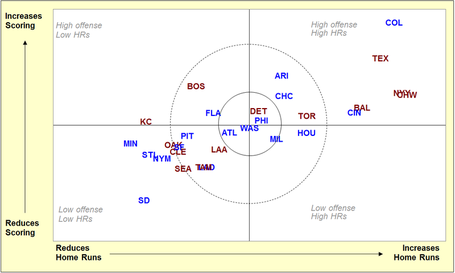 Looking more specifically at Phillies' hitters, they've been helped slightly more than opposing hitters, but the park factors would still be well within the smaller circle in the graph above:

In other words, in games against the Phillies, opposing teams have hit a measly 1.6% more home runs in the games at CBP (and scored 2.1% fewer runs), than they have in their own parks.

Another nail in the coffin of the good old bandbox myth.