Hitting Coaches Are A Mixed Bag

Share All sharing options for: Hitting Coaches Are A Mixed Bag

The Phillies' poor offensive showing in the 2011 LDS has led many to call for the ouster of Greg Gross as the team's hitting coach. This is often expressed as a desire to bring in a proven major league hitter like Mike Schmidt, or Ryne Sandberg.

Those are not bad ideas necessarily, but I was wondering what the profile of a typical major league hitting coach might be. The answer is there really isn't one.

8 of the 30 had successful major league careers of at least 5,000 plate appearances, averaging 33 career WAR
9 had respectable careers mostly as backups, with between 1,000 and 5,000 PAs, averaging 5.5 career WAR
5 had only cups of coffee, amounting to less than 1,000 PAs
8 never played in the majors (and 2 of those never played in the minors, either)

Their career stats after the jump... 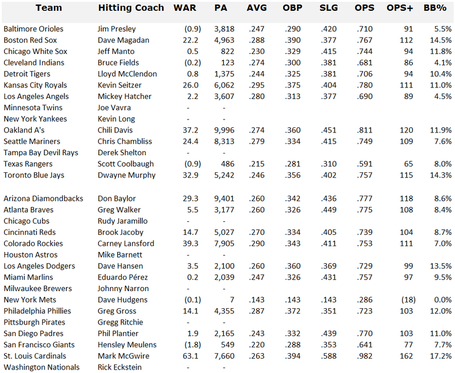 All stats from Baseball-Reference

The two who never played in the minors are Mike Barnett in Houston, and Rick Eckstein (David's brother) in Washington. Both are career coaches who started in college and then moved up through the minors to get where they are today.

Complete list of all MLB coaches, with links to bios, at Baseball-Reference: link

Finally, the table below splits coaches by their career OPS+, and shows where each coach's 2012 team ranked in its league in 2011 OPS+. Each box shows the coach's career plate appearances, WAR, and OPS+. 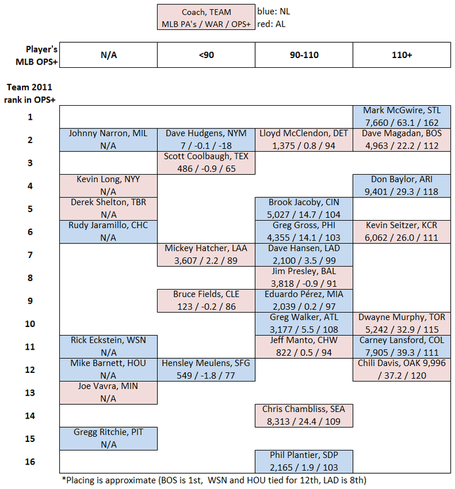