Who Would Buy That Holiday Edition: For The Guys

Share All sharing options for: Who Would Buy That Holiday Edition: For The Guys

The holiday season is a time for giving. It's in that spirit that I've put together several gift guides to help you judge your relatives, and then find the perfect Phillies themed gift for them. Because the holiday season isn't just a time for giving, but for judging and mocking your relatives for their continued ridiculousness, and loving them anyway. 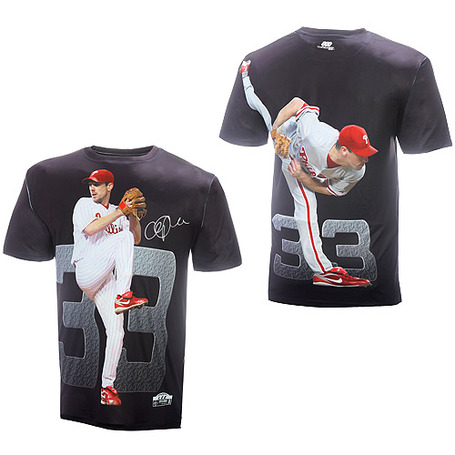 Because sometimes, wearing a plain red t-shirt with Cliff Lee's last name and number on it just isn't enough. Sometimes, you need to show your support of Lee by wearing a shirt with his entire self on it. And his signature! Yes, it's big and white, and no one will think that he really signed it, but why does that matter? It also doesn't matter that this shirt is awkwardly designed, with Lee's left leg climbing up the back of the wearer's left shoulder. The only way to truly experience Cliff Lee is in his entirety, so the design will have to suffer. Also, it looks like the 33 is trying to squeeze Lee into a hug that he has no time for. "I'm busy pitching, numbers! We can cuddle later!" Who to buy this for: This is a great gift for a dad that loves Cliff Lee but has no concept of good design or good clothes. This way, he can keep Lee (and his crotch) near his heart at all times, and the company that makes this horrible shirt will finally sell one. ($39.99, MLB.com) 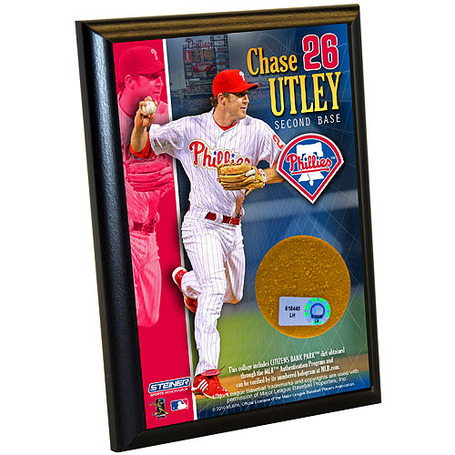 For the Chase Utley superfan in your life! Now instead of buying him something with Utley's name on it, or even something he signed, you can get him some dirt! And it's not just a box of dirt. It's dirt in a plaque! With an authentic holographic sticker on it! The fact that there's a demand for this makes me so very sad. Nothing says "I have an unhealthy obsession!" like dirt in a wooden plaque. (This plaque also says "I spend money on stupid things.") According to the website, the plaque contains "MLB Authenticated game used dirt, taken directly from the field of play." So it's dirt that was at one point on the field at Citizens Bank Park during a game. It may or may not have been played on by Chase Utley. Considering the amount of dirt at CBP, it's safe to say that the only people who touched this dirt were the groundskeepers and the dude who picked up this dirt to sell at a million times its actual value. Now, the image that they use of Utley isn't bad, but the strange, red, enlarged image they use at the left border is just strange -- especially since his throwing arm from the original image is nearly blocking his face. Seriously, they're selling dirt. In a plaque. It's just dirt. Who to buy this for: This gift is perfect for a Chase Utley obsessed cousin. You know the one. The last time you saw him was over the summer, and you sat on the porch with a couple of beers and talked baseball. Well, you talked baseball. He mostly talked about Utley. Three beers in, he stopped singing Utley's praises and started wondering "What would it be like to hug Chase Utley?" You immediately changed the subject, hoping he'd notice that you were kind of uncomfortable. After another two beers, he said "Do you think Chase's hands are soft? Or are they rough and calloused from all that work in the field and holding the bat? And what about his hair? I bet it does that on its own, he probably doesn't even need any gel. His hair is probably really soft." At that point, you took all the beer inside and promised yourself you'd never, ever look in his bedroom. ($19.99, MLB.com) 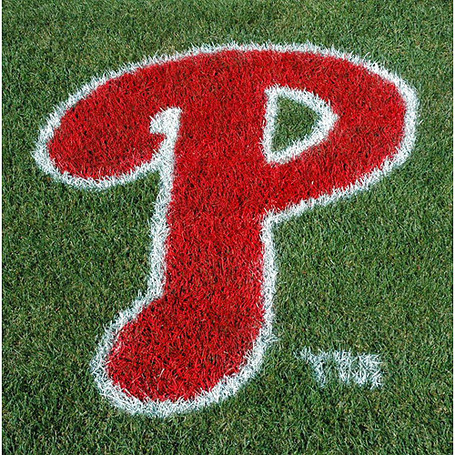 This is one of those things that I completely fail to see the point of. I understand ugly shirts, weird plaques, jewelry, even many Phillies home goods. But this? It's a spray painted Phillies lawn logo. Because a car magnet is too small, and an outdoor flag is too subtle. You want people flying overhead to see that you love the Phillies more than you love the health of your lawn. Of course, they'd have to be flying over your house slowly and close to the ground, like in a hang glider or a hot air balloon. And you can't forget to spray paint the little trademark notation! That's the best part! I've been considering this item for days now, and I still don't really get its point. Is it for little league fields? Is it for ultra super fans? Is it for people who like lawn art? People who want to kill their grass? People who hate their neighbors? Who to buy this for: Your long distance uncle. He lives with his family in Atlanta and dreams of moving back to "Phillies country" (as he calls it). When the Phillies eliminated the Braves from the playoffs, he was lost for a way to express his glee and delight. Yes, he wore Phillies gear to work and everywhere else. He added four new Phillies magnets to his car. He mounted a new outdoor Phillies flag. Yet no one in Atlanta seemed to care. With this present, your uncle can really show those Atlanta Braves fans which team rules the NL East...when he finally finds some Braves fans, that is. ($99.99, MLB.com) 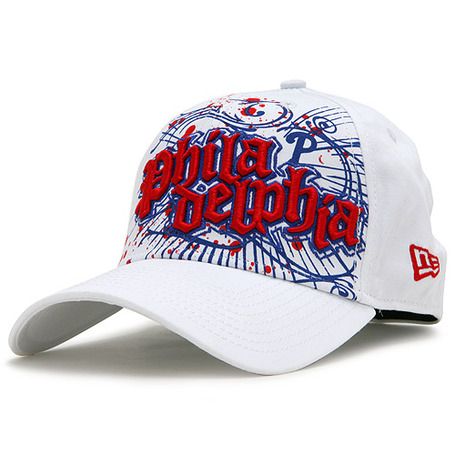 There are a lot of ugly hats out there. You'd think a hat was easy -- you take a hat, put a logo on it, and that's it. I don't think a lot of people ask for much more out of their sports related headgear. But all that empty, negative space on the front of the hat was too much to resist, and now we have monstrosities like this hat. It's made by a company called 39THIRTY, a division of New Era. I'm telling you so you can stay away from them. There are so many things wrong with this hat I don't even know where to start. Let's begin with the basics. The hat itself is white. Now, white things aren't easy to keep clean. White shirts, white pants, white shoes. So at its core, this hat is pretty impractical. Let's move on to the screen printing. It's mostly in blue, which is not one of the Phillies colors, last time I checked. There are weird little red paint splotches, but those are decidedly in the background. (And apparently intentional.) The strange, blue, starbursty pattern is more prominently featured. It's got lines and swirleys. But the main attraction of this hat, the real focal point, is "Philadelphia" embroidered in red, and in what I'm guessing is a gothic/douche combo font. The font is so big that word is divided into "Phila" and "delphia" with no dash. The only Phillies thing on this hat is a small, blue Phillies "P" next to the "a" in "Phila". This is the ugliest hat I've ever seen. Why would you wear a Phillies hat if no one can tell it's a Phillies hat? Why? This hat does not say "I'm too edgy to wear a Phillies logo hat." This hat simply says "I'm a huge asshat." Who to buy this for: Your idiot brother-in-law. Not a single family gathering goes by without you wishing your sister had married someone else. Someone a little smarter. A little nicer. Someone who wasn't a complete and total douche. But she hasn't divorced him yet (you have February in the pool), so you have to buy him a Christmas gift. He wears a lot of Ed Hardy, but the thought of buying any of that makes you want to vomit. He wears a lot of aftershave...or cologne...or body spray...but the smell makes your eyes water. You don't want that in your home. (Which is why your brother-in-law never comes over.) This hat is the perfect gift. It looks like Ed Hardy, but it's actually Phillies. You don't think he'll notice. "Totally sweet cap, bro!" ($19.97, MLB.com) 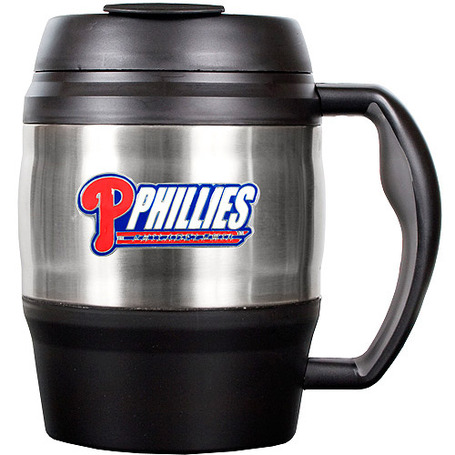 The name of this item is the Macho Travel Mug. It holds 54 ounces. I'm going to put that in perspective for you. Take a regular two liter bottle of soda and pour out 1/4 of the bottle. The amount you have left? That fits in this mug. I don't care what you put in this mug -- beer, wine, soda, milk, water -- it's too much. It's too much of anything. The only other place I've seen a mug this size is in the hunting equipment section of my local Target. The name of this item implies that you'll be traveling with it. Please, imagine trying to travel with this. The mug is eight inches high and five inches wide, and holds a liter and a half. Unless you have the arms of Hulk (or perhaps a major league baseball player), you're not holding this while you do anything. And what about traveling by car? If you have a cup holder that can hold this "travel" mug, I'm assuming that it was custom installed, and that you have bigger issues than overlarge mug transport. Imagine carrying this thing around at work. You're wearing your suit, looking sharp, and here comes the cute girl from the fine foods division. You've been working up the nerve to ask her out for months. You smile at her, and she smiles back. Her gaze flicks down to your hands and then immediately back up. The look of terror and disgust on her face is unmistakable. She turns on a dime and practically runs from "that weird guy with the massive travel mug." If a guy is to be known for something massive, I'm sure his travel mug isn't his first choice. Who to buy this for: Your weird survivalist family friend. You only see him once a year, and no one is quite sure who was originally friends with him. It had to be someone, right? He shows up every year at your parents house, wearing an army camo uniform that may or may not be his. He doesn't say much, but at least he stopped wearing his weapons belt in the house. When you were driving in a few years ago, you saw him emerge from the woods a few miles from the house. You offered him a ride, but he declined, mumbling something about "not trusting the government's devil transportation machine." As you drove away, he yelled "THEY KNOW EVERYWHERE YOU GO!" He can use the travel mug the next time he's out walking in the woods. Or he can use it as a weapon to silence people who stumble on his hideout. Whatever! ($39.99, MLB.com)