Who Would Buy That Holiday Edition: For The Ladies

Share All sharing options for: Who Would Buy That Holiday Edition: For The Ladies

I always lament the scarcity of Phillies merchandise for ladies. I'm not talking about a pink jersey or something with sparkles on it. I mean, why don't they have some of the guys t-shirts (like the one with the Phillies uniform through the years) in a female friendly design? Are The Powers That Be sticking us lady fans with ugly/pointless/offensive/pink products as a punishment for something? Whatever it is that we did, I apologize. Anything to rid the world of the Alyssa Milano Touch Collection.

I hope the guide below helps you find the right piece of chick-themed Phillies merchandise for the women in your life that you care deeply about. Alternately, I hope that it horrifies and also educates you about the ridiculous items that I (and other women) have to choose from if I want something Phillies that isn't made for a dude. 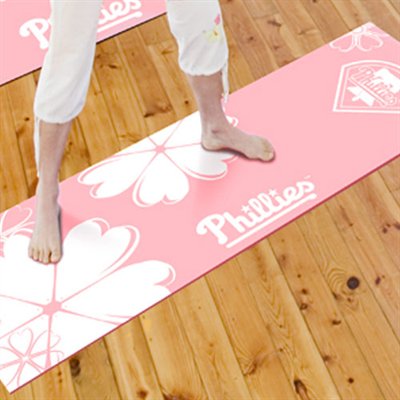 Take a look at the image above and tell me what your first impression is. My first impression was "Is there a reason someone needs or even wants a Phillies yoga mat?" My second impression? "Sweet Christ on toast, that is PINK." I can see what they were trying for -- they wanted a pretty, soft, pastel pink to go with the tranquil, earthy feel of many yoga studios. What they ended up with is something that's closer to Pepto Bismol. Nothing brings you out of concentration faster than catching a flash of that color out of the corner of your eye! Beyond the color issue, the flower (or "flower") design is completely baffling. That looks like a flower that I drew on the top of my desk in third grade. It's literally just hearts smooshed together. I know that they were going for more of that simple, earthy, zen type stuff, but they missed simple and earthy and landed on childish and stupid. Honestly, if I ever wanted a Phillies yoga mat (I don't), I'd want one in fire engine red and white. Make it as distracting as possible so everyone in the class knows that I'm a Phillies fan. Who to buy this for: Your hippie sister-in-law. You don't really want to get her a gift at all. She is crushing your brother's spirit and neutering his soul until it's an unrecognizable blob of homemade granola and hemp. When they got married, you figured they would compromise and weave their two styles together: her organic hippie earth mother style, and his normal person vibe. What you didn't foresee was her becoming a life sucking, soul consuming hosebeast, turning your brother into withered husk of a man. No more meat. No more beer. No more sports. "Sports are too competitive" she said last year when you attempted to turn the Phillies game on at their house. "It makes people aggressive. And we don't want any of that in this dwelling. Yoga is so much more natural." Instead of throttling her on the spot (using a handmade pillow stuffed with hemp and wood fiber), you decided to start sneaking your brother out to eat meat, drink beer, and watch the Phillies. Until you can firm up a plan for her accidental demise, it's the least you can do. And hey, maybe this gift will help her realize that she's an evil, uncompromising harpy. ($24.95, footballfanatics.com) 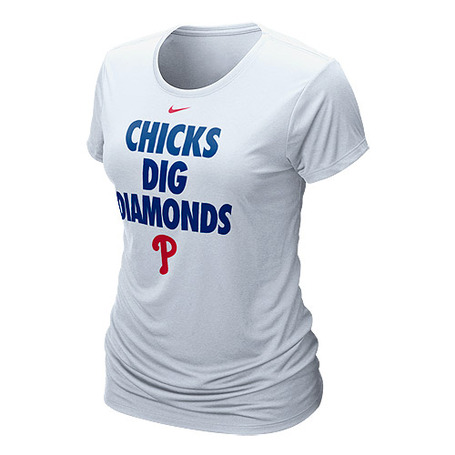 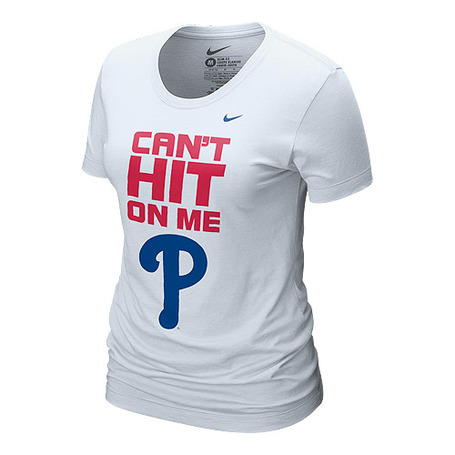 Rage isn't a strong enough word to describe how I feel about these shirts. I'm not sure a strong enough word exists. I'm open to suggestions. I'm guessing these shirts are for female fans who don't want to show too much skin, but still want people to know that their goal is schtupping a professional baseball player or a rich guy. The "Chicks Dig Diamonds" shirt can at least be taken two ways -- diamonds as in baseball, or diamonds as in the expensive stone. That doesn't really make it better, though. The "Can't Hit On Me" shirt doesn't even have two meanings. I think they were trying to do something with hitters not being able to get a hit, but they got lost while trying to make it seem sexy instead of assault-y. A pitcher can say "can't hit me". A woman wearing a shirt that says "Can't Hit Me" reads more like a sexual assault/domestic abuse awareness/prevention shirt. So they changed it to "Can't Hit On Me", which gets rid of the violence implication, but it also doesn't really have anything to do with baseball at all -- with the exception of the big Phillies logo. "Can't Hit On Me" with the Phillies logo seems like the wearer is saying to everyone "I am a shameless cleat chaser, evidenced by the shirt I am wearing right now. Unless you are a member of the Phillies, don't even think about looking at me, let alone talking to me. Hey, does Pat Burrell still play here?" Who to buy this for: Your dim, shallow cousin. Everyone in the family had to face it a long time ago: your cousin isn't the brightest bulb in the box. It would be easier to deal with if she was sweet, but she's not -- she's aggressively shallow. Her expensive tastes (not to mention her insane, ritualistic beauty regimen) have led her to date a succession of local rich dudes. The guy who owns a chain of dry cleaners. The personal injury lawyer with all those commercials. The owner of the local minor league baseball team. Seeing all those baseball players gave her an idea. "What if I dated a young rich guy? Instead of an old one? Then I wouldn't have to date an old guy. Right?" You sighed, wishing you hadn't answered this call on speakerphone with your boss in the room. With her sights currently set on convincing a baseball player to buy her a new Lexus, you can't think of a better gift. ($19.99-$24.99, MLB.com) 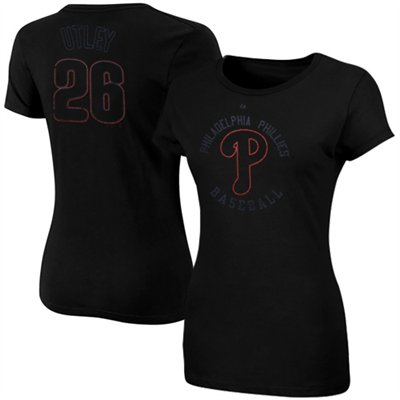 "Ladies, your love for Chase Utley and the Phillies will be heard around the world when you wear this Shout It Loud tee by Majestic." I'm guessing that the person who wrote this item description had never actually seen the shirt. In my estimation, if you are more than five feet away from the wearer, then you have absolutely no idea about their love for Chase Utley and the Phillies. Why? Because the shirt is black. And instead of featuring Utley's number or the Phillies logo in a block font, they've chosen to thinly outline them. The logo on the front is outlined in the strongest color, with "Philadelphia Phillies Baseball" encircling it in a light gray. Highly visible, right? Wait until you get to the back of the shirt! The number 26 is sparsely outlined in red (not as bright as the red on the front of the shirt), and Utley is outlined in light gray. This shirt makes a statement, that statement being "I bet you thought that I was wearing a normal black t-shirt until you got closer." Perfect for the woman who doesn't want people who are far away to know that she's wearing a Phillies shirt, but she's ok with the people right next to her knowing. Who to buy this for: Your goth auntie. It started a few years ago when she decided to read the horoscopes for each Phillies player every day. What she hoped to accomplish was beyond...well, most people, yourself included. Then she started doing weekly rituals in her backyard, trying to cleanse the team of their recent losses. When Chase Utley hurt his thumb, she took up witchcraft and spent enormous amounts of time researching and performing spells to help speed the healing process. When she started talking about arranging a seance to commune with the souls of Harry and Whitey, you had to unsubscribe from her Facebook updates. This shirt is perfect for her -- she can wear it to a game! Or at least a few innings of it, until she's told that her chanting and dancing is disruptive and she's escorted from the ballpark. Again. ($24.95, footballfanatics.com) 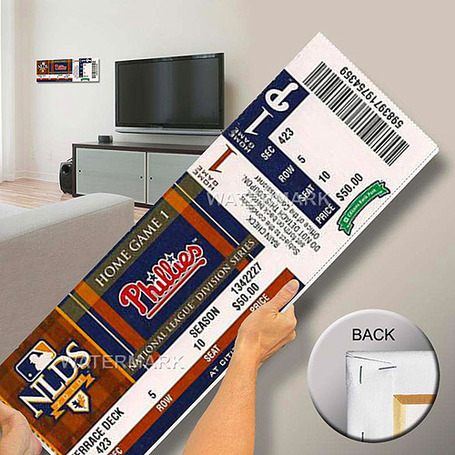 I'll admit it. I'm cheating. This gift is not female centric. It's not even male centric. But it's too stupid for me to leave off of one of these guides. Stupider, even, than the spray paint lawn logo. It's a mega ticket. It's a 11"x33" replica of a ticket. You *could* take your ticket to Halladay's postseason no-no and frame it along with a picture of Halladay hugging his beloved catcher. But why would you want to do something so meaningful when you can instead mount a massive replica of a game ticket (not your ticket, but someone's ticket!) on your wall for all to see? Meaningful is for sissies. Everything is better when it's bigger! You may have missed the last pitch of the no-no because you had spilled your 85 oz drink all over yourself, but those are the hazards of GOING BIG. Who to buy this for: I honestly can't imagine anyone buying this for themselves or anyone else. For many reasons, but mostly because IT'S NOT YOUR TICKET! You don't get to send them your ticket so they can enlarge it. You can't even tell them where your seat was so they can fill that in. It's a random ticket large enough to kill a small animal. I briefly thought that someone could mount this next to their Roy Halladay Fathead, but a Fathead is roughly life sized. If you put this mega ticket next to life sized Roy Halladay, it's going to look like an evil giant is trying to beat him with his ticket. ($99.99, MLB.com)