Alpacalypse Now: Billy Wagner and the Heart of Darkness - Part One

Share All sharing options for: Alpacalypse Now: Billy Wagner and the Heart of Darkness - Part One

Editor's Note: In the wake of widespread reports that the Phillies had allegedly reached out to retired reliever Billy Wagner and his agent about coming back to Philadelphia, The Good Phight received the following top secret dossier from inside sources with the organization. 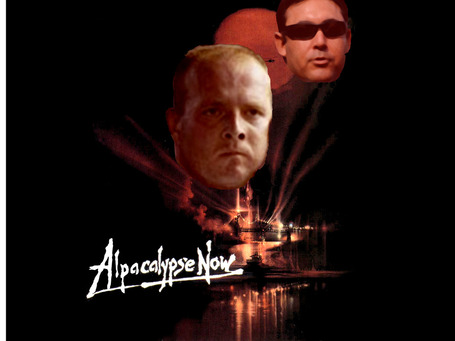 From JOURNAL OF CARL WILLARD, baseball scout with previous ties to Phillies organization:

Suburbia. Shoot. I was still only in suburbia. Every time I think I'm going to wake up back at the ballpark. When I was home after my first season, it was worse. I'd wake up and there'd be nothing. I hardly said a word to my wife until I said yes to Chickie's and Pete's. When I was here in the subdivision I wanted to be back there. When I was there, all I could think of was getting back into the clubhouse. I've been here a week now. Waiting for the Winter Meetings, getting softer. Every minute I stay in this house I get weaker. And every minute Charlie Manuel sits in the dugout he gets stronger.

Everyone gets everything he wants. I wanted a mission, and for my sins they gave me one. Brought it to my house like Federal Express.

I was going to the worst place in the world, and I didn't even know it yet. Hours away and hundreds of miles down the Interstate that snakes its way through Appalachia like a main circuit and plugged straight into Wagner. It was no accident that I got to be the caretaker of Billy Wagner's legacy, any more than being back in suburbia was an accident.

AMARO: Willard, come on in, want a hot dog?

WILLARD: No, thank you.

AMARO: Have you ever seen this gentleman before [gestures to Gillick] or myself?

WILLARD: No, sir, not personally.

AMARO: You've worked a lot on your own, haven't you?

WILLARD: I'm not personally disposed to discuss those operations, sir.

AMARO: Did you not work for Ed Wade?

AMARO: Did you not negotiate the agreement that was to bring Tom Glavine to the Phillies, only to see the Mets interfere?

WILLARD: Sir, I am unaware of any such activity or operation -- nor would I be disposed to discuss such an operation if it did in fact exist, sir.

AMARO: Pat, would you please play that tape for Willard? Listen carefully.

WAGNER (on tape): We have alpacas. My kids do all the work. They do all the shoveling and feeding and everything. We take 'em to the butcher. We bring the bull over. We do all that. It gets to a point where there's something more meaningful.

GILLICK: Billy Wagner was one of the most outstanding closers this game had every produced. He was brilliant and outstanding in every way and he was a good man, too. Humanitarian, man of wit, of humor. He joined the Mets, then the Braves. After that his ideas, methods have become... unsound. Unsound.

GILLICK: Well, you see Willard, in this game, things get confused out there, power, ideals, the old morality, and practical competitive necessity. Out there with those savages in New York and Atlanta it must be a temptation to be a god. Because there's a conflict in every human heart between the rational and the irrational, between good and evil. The good does not always triumph. Sometimes you become a rat. Every man has got a breaking point. Billy Wagner reached his. And obviously, the Phillies need him back.

WILLARD: Yes, sir, very much so.

AMARO: Ryan Madson is a free agent, and we're terminating our relationship. Insubordination. And we absolutely will not pay that idiot, Jonathan Papelbon. Your mission is to proceed to Carlisle on the Pennsylvania Turnpike, then pick up Interstate 81, follow it, learn what you can along the way. When you find Wagner, infiltrate his farm by whatever means available and negotiate his return to Philadelphia.

GILLICK: He's out there operating without any purpose. Totally beyond the pale of acceptable human conduct.

AMARO: You understand, Willard, that this operation does not exist, nor will it ever exist.