Well, what a bright bit of news this is.

Phillies right fielder Domonic Brown, already struggling through a rough spring, fractured the hamate bone of his right hand during a swing in this afternoon's game, and will likely require surgery.  If so, he'd be expected to return to baseball action in three to six weeks.

More concerning than that is the anecdotal medium-and-long term loss of power experienced by players suffering similar injuries.  Per Keith Law, power can take 12 to 18 months to return.

Whether or not we could expect big things from Brown on the big league level in 2010, the strong chance that Brown's development will be adversely affected by the injury is the biggest concern.  He's still young, yeah, but this is still pretty bad.

The sad irony is that Brown got his first hit of the spring later in the at-bat where he broke his hand.  He got a hit with a broken hand. 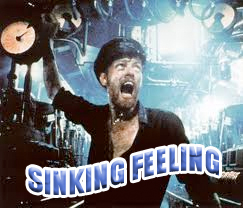