After a rough outing in his first start of the season that saw him surrender six runs in the third inning and depart to boos, the non-mouth breathing contingent of Phillies fans were quietly expecting a rebound for Cole Hamels today against the division rival Braves.

What he delivered was a gem: 7 innings, 4 hits, 0 runs, 1 walk, and 8 strikeouts. Hamels used sharp command of his mid-90s fastball--which seemed to be lacking in his first start--to set up his dominant changeup--which also seemed to be lacking in his first start. It didn't hurt that he was able to mix in an effective cut fastball to crowd righties and run away from lefties. The Braves were unable to hit anything particularly hard against him--the kind of masterful performance we have grown accustomed to seeing from the young ace. The few times he did face any trouble he was able to escape without event. He faced two-on, two-out situations in both the sixth and seventh innings and was able to induce groundouts from Chipper Jones and Freddie Freeman, respectively.

In many ways, today's game went just as Ruben Amaro, Jr. drew it up for the team before the season: dominant pitching for at least seven innings with just enough offense to scrape by. For his part, Braves starter Derek Lowe was very good today. The sweaty one held a Phillies offense that had scored at least seven runs in five of its first eight games to just two runs on seven hits. The first came in the fourth inning on Jimmy Rollins double play and the second on a solo homer by a red hot Shane Victorino as Larry Andersen lamented on the radio that Rollins and Victorino don't bunt enough.

Ryan Madson pitched a scoreless eighth inning and the Phillies added a welcome but ultimately superfluous insurance run in the top of the ninth against young flamethrower Craig Kimbrel. Rollins led the inning off with a double and moved to third on a Jason Heyward bobble in right. Ryan Howard followed with a groundout to short, but Jimmy, running on contact in a heads-up baserunning play, came in to score. Jose Contreras, facing Chipper Jones, Brian McCann, and Dan Uggla, closed the door with a perfect frame, striking out Uggla to give the Phillies the win in the first campaign in what figures to be another tense, season-long war for NL East supremacy.

The Phillies are off tomorrow and then head up to D.C. to take on the Washington Nationals. 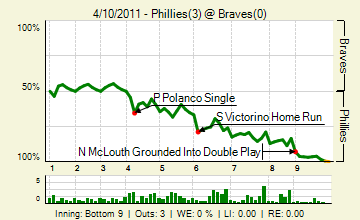