Jayson Werth was Created By Man. He Rebelled.: Nationals 7, Phillies 4

Share All sharing options for: Jayson Werth was Created By Man. He Rebelled.: Nationals 7, Phillies 4

It was kinda-sorta Jayson Werth's "homecoming" game (if the booing idiots in right field were any indication), and the former Phillie made a spectacle of himself, hitting a solo home run and a double en route to a 7-4 Nationals victory over the Phillies on Tuesday night in Washington.

The Phillies jumped out to a quick 1-0 lead on a Ryan Howard solo home run in the second.  The Nationals then proceeded to score five unanswered runs off Phillies starter Joe Blanton in his six innings.  Nationals starter Livan Hernandez allowed the sole run on the Howard bomb in his 6 2/3, striking out six and walking none.

And of course, it figures that as soon as we recognized the terrific performance of the bullpen so far, they lay an egg, with David Herndon, Antonio Bastardo, and Danys Baez combining for two runs, on two hits, plus four (!) walks in two innings pitched, as the Nationals built up a nice cushion of insurance runs that helped the team stave off the Phillies miniature eighth and ninth inning rallies.  I guess it's understandable, in that these guys are the soft underbelly of the 'pen, but Charlie Manuel certainly isn't the kind of manager to put "his guys" (Ryan Madson, Jose Contreras) in in a losing effort. 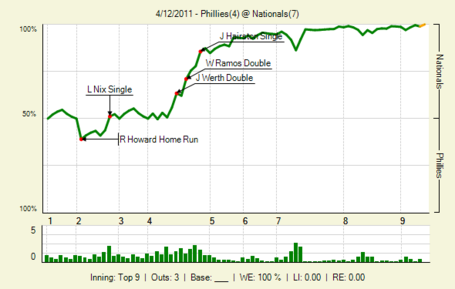