Share All sharing options for: Phillies 3, Nationals 2: Cutter'd it Close

Something funny happened on the way to Roy Halladay's complete game shutout of the Washington Nationals tonight. He walked two guys! Two! Consecutively! In the third inning. Neither scored, mind you, but there was this lingering frisson of uncertainty early, as home plate umpire Al Porter called an inconsistent strike zone all night.

And then there wasn't that uncertainty. The go-go Phils offense was at it again against Nationals' whipping boy John Lannan, who remained winless against the Phillies. The Phils managed just six hits on a chilly midweek schoolnight game at Nationals Park, with its attendant empty seats and loud clusters of Phillies fans. The Phillies started their scoring in the fourth, when Jimmy Rollins reached base on an error by Nationals shortstop Ian Desmond. Desmond's inadvertent collision with Rollins on Ryan Howard's groundball then gifted Rollins with third. Ben Francisco followed with a groundball to short, which brought in Rollins. (Game's easy, Harry.)  In the fifth, Placido Polanco's RBI single up the middle was the only "clean" run scoring hit, and that came before Lannan hit Ryan Howard with the bases loaded (scoring Halladay) to build the lead to 3-0.

The Phillies also played well defensively all around the infield, with the one quibble of Ryan Howard, who hesitated on a double play chance before throwing out Laynce Nix. But aside from the walks, Halladay etherized the Nationals through the eighth inning, before coming out to start the ninth.

Then the snooze alarm went off. And runs scored! Two of them! Consecutively! Rick Ankiel doubled to lead off the ninth, which brought on Jayson Werth, who up to that point was 0-3 with two strikeouts. But he singled, moving Ankiel to third. Halladay then struck out Adam LaRoche on a full count for the first out.

Laynce Nix followed with a single to right to knock in Ankiel, moving Werth to third, and prompting Charlie Manuel to jog out of the dugout to leave Halladay in the game to pitch to Danny Espinosa. Espinosa promptly hit an infield single that scored Werth, putting the tying run on second with one out.

But Halladay struck out Matt Stairs on three pitches without a swing, then struck out Ivan Rodriguez looking on a curveball on the outside corner of the plate to end the game, leaving the Nationals' catcher to lament his sorry fate to Al Porter, but, alas! 'twas all for naught, as Halladay departed victorious again after his 123rd pitch of the night, albeit with a newly bloated ERA: 1.23. 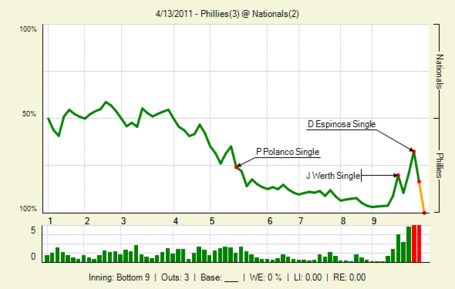