A night that started out looking like the Phillies were well on their way to their third straight dominant starting pitching performance ended with a relatively minor but possibly worrisome injury to Roy Oswalt, some questionable bullpen deployment, and a fourth straight series-opening loss to the Florida Marlins, as the Phillies dropped Friday's contest by a score of 4-3.

Oswalt looked stellar through the first few frames, keeping the Marlins off the bases altogether through three, and hitless through four, before allowing a solo home run to Logan Morrison to lead off the fifth.  The Phillies, for their part, had lots of baserunners of Marlins starter Javier Vazquez in the early going, and hit numerous deep fly balls, but just couldn't seem to get anything over the fence.

The Phillies had a 2-0 lead after the first, and a 3-1 lead after five.  A close game, but Oswalt looked to have things in hand.  And then the sixth inning came, when Oswalt's lower back appeared to seize up as he ran out a bunt.  It's unclear right now how severe the injury is, but worth noting that the righthander has had lower back problems in the past.  So... worry, but don't freak out yet.  Oswalt's final line: Six innings, two runs, six strikeouts and one walk.

Going into the seventh with a 3-2 lead is an OK time to use some of your lesser relief pitchers, but to use a very short leash.  Charlie Manuel, God love him, gave the ball to J.C. Romero, who promptly allowed an infield hit, and was immediately replaced by Danys Baez.  Two hits (including a two-RBI single from Greg Dobbs) and a walk later, and the Marlins had a 4-3 lead.  Then, and only then, were Antonio Bastardo, Ryan Madson, and Jose Contreras brought in.  I really have nothing else to add.  It was truly atrocious bullpen usage.

So: An injured ace, a reckless bullpen suicide, and a series-opening loss to a division rival.  Yup, good night. 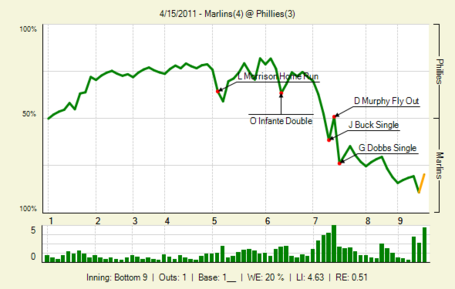 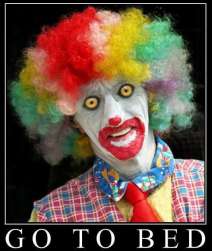