After a tough come-from-ahead loss Friday night and Saturday's dreary rainout, the Phillies and their fans were looking for a pleasant, low-stress Sunday afternoon win over the visiting Florida Marlins, their closest current pursuer in the NL East. For awhile there, it looked like they might get it: the Phils jumped to a 2-0 lead on a Placido Polanco solo homer and Raul Ibanez's two-out RBI single, and Cole Hamels looked razor sharp striking out five Marlins his first time through the order.

But the Phillies couldn't land the knockout blow against Florida starter Anibal Sanchez, who rallied from a very high early pitch count to finish six solid innings with only those initial two runs allowed. Hamels worked around a leadoff Hanley Ramirez double to strand runners at second and third in the fourth, but the Marlins evened the score in the sixth on an Omar Infante leadoff double, a one-out RBI single from Mike Stanton, and Logan Morrison's sacrifice fly two batters later. Florida looked poised to take the lead an inning later, when pinch-hitter Emilio Bonifacio reached on a bunt single, stole second and moved to third on a Chris Coghlan infield single. But Hamels induced an around the horn double play from Infante to finish a strong seven-inning start. As was so often the case in 2010, he didn't get a win for his troubles.

Ryan Madson put up a zero in the eighth, and the Phillies finally pushed another run across in the bottom of the inning when Ryan Howard and Ben Francisco both singled to left, Ibanez grounded into a fielder's choice to put men at the corners with one out, and Carlos Ruiz battled back from an 0-2 count to deliver a sacrifice fly to center that scored Howard.

Jose Contreras came on for the ninth and "earned" the save with a less than dominating performance. He began the inning by walking Florida catcher John Buck, he of the career .300 on-base percentage; pinch-runner Scott Cousins went to second on a Wes Helms bunt, and moved to third as old friend Greg Dobbs grounded out. Contreras then walked Coghlan, who promptly stole second to move the go-ahead run into scoring position. Contreras jumped ahead of Infante 0-2, saw the count go back to full, and finally induced a game-ending groundout to Polanco at third.

The Phillies earned a series split with the win and restored their two-game advantage over Florida. Joe Blanton kicks off a three-game set against the Milwaukee Brewers Monday night. 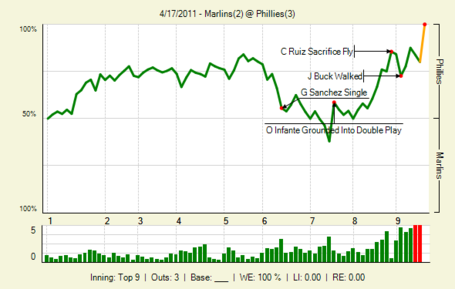