The Phillies still have yet to play a three hour game this year.  But now they have a four hour one, after dropping tonight's opener to their home series against the Milwaukee Brewers by a score of 6-3 in twelve innings.

Phillies starter Joe Blanton, in his third start of the young season, was sharp, going seven full innings, striking out four and allowing two runs.  But the Phillies offense was once again mostly ineffectual, managing just nine hits (all singles).

The game had some bizarre moments, most notably in the seventh inning, shortly after the Phillies had tied the game at two runs apiece.  With runners on first and second and one out, Placido Polanco ripped a line drive up the middle off Brewers pitcher Sergio Mitre's back.  The ball floated straight in the air, and was caught just inches off the ground by Brewers shortstop Yuniesky Betancourt, who then promptly doubled pinch runner Michael Martinez off second base.  Threat over.

The Brewers then proceeded to take the lead 3-2 off Ryan Madson in the eighth, then sent "closer" John Axford to save the game in the ninth.  Axford was wild, walking Carlos Ruiz to lead off the inning. Wilson Valdez bunted Ruiz to second, who was then driven home on a Pete Orr (?) single.

Then... the 12th inning.  After burning through the entire bullpen, save Danys Baez, Charlie Manuel turned to the Kyle of Last Resort, Kyle Kendrick, and he didn't disappoint.  After issuing a leadoff walk to Rickie Weeks, Kendrick committed a throwing error on the very next play on a sacrifice bunt, setting up first and third with no outs.  A couple of sacrifice flies, a wild pitch, and an RBI single later, and the Phillies fell behind by a score of 6-3.

The Phillies threatened in the bottom of the 12th, putting Shane Victorino and Jimmy Rollins on base with one out.  Ryan Howard, representing the tying run, lined out to third, and Ben Francisco popped out to right, ending the threat and the game. 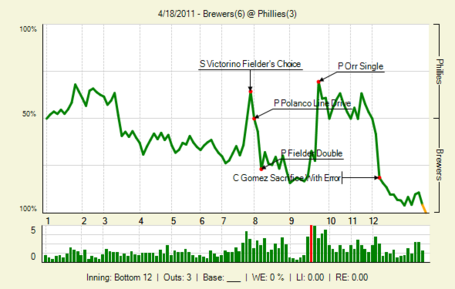