Short of catching a line drive with his cap, there wasn't much more Cliff Lee could have done to live up to the hype in his triumphant return to the mound at Citizens Bank Park. The prodigal lefty won the inaugural start of his second Phillies go-round with seven superlative innings, holding the Astros to four hits and no walks while striking out eleven.

Meanwhile, the Phillies hitters picked up early where they'd left off late on Friday, banging out fourteen hits against Wandy Rodriguez and four Houston relievers. Once again, the Phils generated their offense without recourse to the long ball, scoring in five of their eight innings with a barrage of singles and doubles. Every starter had at least one hit, and Placido Polanco, Jimmy Rollins, Ryan Howard, Ben Francisco and Raul Ibanez all had multi-hit games. Francisco, Ibanez and Shane Victorino each had two RBI on the night.

But there was no doubting the star of the show. From his dominant first inning--when he induced a Michael Bourn groundout and struck out Angel Sanchez and Hunter Pence--Lee was in control. He flashed the arsenal fans remembered from the 2009 stretch run: low-90s running fastball, vicious cutter, sharp curve, nasty change. The Astros didn't manage a hit until the fourth, when Sanchez singled and came around to score two batters later on a Carlos Lee smash to the gap that fell for a triple when Francisco and Victorino both dove for it and missed. That brought the Astros within a run at 2-1 and the tying run at third with one out, but they got no closer as Bill Hall struck out and Chris Johnson grounded back to Lee.

The Phillies got those runs back in the bottom of the inning on Victorino's two out, two-run single, and essentially put the game away with three more in the fifth as Francisco, Ibanez and Wilson Valdez all registered run-scoring hits. Carlos Lee struck again with a two-run homer in the sixth, but Cliff Lee put an exclamation point on his return with a 1-2-3 seventh that included two strikeouts. Danys Baez and Jose Contreras finished up for the Phils, whose pleasant night was blemished slightly with Victorino's departure from the game in the sixth with a calf strain. 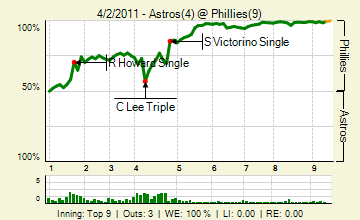