At one point, it looked pretty bad. Then at other, various points in the game, it still looked bad. And it just... kept...going.

'Round about the sixth inning, it was time to lie back and think of England, royal foppery, the Gulf shrimp industry, hell - anything to take your mind off the fact that the Phillies were about to be swept, and the Milwaukee Brewers would add the rudest sorts of wretched punctuation to an ugly bag of mixed metaphors by licking the floor clean against aces Roy Halladay and Cliff Lee.

And then Wilson Valdez walked - unremarkable at first, perhaps, and maybe a little less so after Phillies starter Cliff Lee, already down 3-0 at that point, was lifted for pinch hitter Michael Martinez, who then promptly flied out to left. To that point, Brewers starter Chris Narveson had surrendered only one hit - a two-out double to starting left fielder John Mayberry Jr., who was playing in left field for the frigid Raul Ibanez. That hit, moreover, was the first one in 17 innings for the Phillies, and notable not just for its rarity, but for the rat's luck that followed, as the inning ended when Carlos Ruiz smacked a ball to short right field that Rickie Weeks caught with a leap.

But I was writing about the sixth.

So there things stood, 3-0 Brewers, 1 out, and Valdez - who had cost his team a run in the third inning with a dropped fly ball with two outs - clearly going nowhere at first. Shane Victorino then hit a ball through the right side to put runners on the corners. Placido Polanco - who despite the Phillies' offensive woes continues to hit the ball hard - then hit a home run to the first rows in left to tie the game at three. Now: for those who have difficulty recalling - a home run is one of those deals where if the ball clears the outfield fence, the outfielders can do nothing as the runners run all the way around the bases! Everybody cheers. A big mechanical bell lights up, sways and rings. But I digress. Despite another walk by Ryan Howard and a single by Ben Francisco, Narveson and the Phils reverted to form and made the final two outs.

Kyle Kendrick then came on to pitch the seventh. Now: for those who have difficulty recalling - this is the same guy who coughed up an absolute hairball on Monday night in extra innings. So it only stood to reason that Phillies manager Charlie Manuel would force him back up on that horse to face the top of the Brewers' lineup, because the man was right, his Gut(TM) was even more right, and Kendrick just set them all down in order. You might have missed that part if, like me, you were holding your hands over your face watching him to pitch to Ryan Braun.

The Brewers then held serve, throwing Brandon Kintzler - their own version of fringe roster replacement-level talent - at the Phillies in the seventh. He saw Kendrick's "retired in order" and raised it to "struck out the side."

But in the eighth, Hero(TM) Shane Victorino led off by hitting yet another home run (see above on what you can do when you hit one!). Cue once more the crowd, the bell, and curiously enough, the weather - which had been in the mid-60s at game's start, by this point was climbing closer to 80 degrees, a.k.a. "hittin' weather." (A word on young Kintzler: He deserved a better fate, and it will be interesting to see if the Brewers can make something of their own reclamation project. But for his home run to Victorino, he was impressive in his two appearances this week.)

Ryan Madson - with some drama - pitched a scoreless eighth. Jose Contreras came out for the ninth, and after striking out pinch hitter Mark Kotsay, gave up a single to Rickie Weeks. Carlos Gomez then hit a ball to short right field that Wilson Valdez caught going back - an impressive feat of fielding redemption that then set the stage for Contreras to strike out Ryan Braun. Game over, and the Phillies' longest losing streak of 2011 remains at two games.

Give credit where it's due. Manager Ron Roenicke and his statistically minded staff bear watching as this season continues; other teams could do a lot worse than to study closely the approach that the Brewers took against the Phillies this week, from defensive positioning to pitch selection to pitching matchups.  Despite the Phillies missing key players and playing poorly, the Brewers are still without Corey Hart and Zack Greinke.

Air of foreboding notwithstanding, it's off for a southwest swing, as the Phils head out to San Diego for a four-game series with the Padres before playing three against the Arizona Diamondbacks. Roy Oswalt, recovered from what was merely a flesh wound, will pitch.

h/t to WholeCamels for the headline. 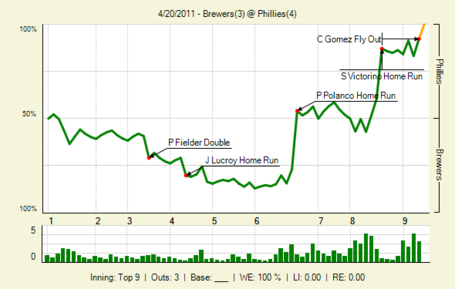