Phillies fans back east battling sleep to watch their heroes take on the San Diego Padres in the opener of a four-game set late Thursday night didn't get much help from the action on the field, a somnolent affair that dragged well beyond three hours despite the fact that only three runs were scored. But at least the dreams were pleasant, as Ben Francisco and Brian Schneider slugged early solo home runs to support Roy Oswalt and three relievers as the Phils won their second straight and improved to 12-6 on the season.

Oswalt showed no lingering effects from the back injury that forced from the game after six innings against the Marlins last Friday night, not allowing a hit until Nick Hundley's single with two outs in the fifth inning. But his high pitch count--significantly inflated by one 15-pitch at-bat against old Phillies nemesis Jorge Cantu in the fourth--all but ensured that Oswalt wouldn't hang around to chase history. He departed after six innings, having limited San Diego to that lone hit and two walks against seven strikeouts.

Meanwhile, the Phillies were working deep counts against struggling Padres starter Mat Latos, who allowed the two solo homers and a third run but might have fared much worse; he walked five in 4.1 innings, throwing 107 pitches along the way. But Cory Luebke kept San Diego close with 2.2 scoreless innings, and Pat Neshek and Chad Qualls each added a scoreless frame.

Oswalt gave way to David Herndon, who recorded the first two outs in the seventh before allowing a single and a walk; Antonio Bastardo came on to walk pinch-hitter Will Venable, loading the bases, but got Alberto Gonzalez to fly out to right-center. He added a scoreless eighth, recording two strikeouts. Jose Contreras seemed set to finish his fifth save without any drama, but with two outs he surrendered a double to Cameron Maybin and walked Venable. Pinch-hitter Brad Hawpe came up as the tying run and worked the count full, but took a called third strike to end the game and consign the Padres to their fifth shutout loss in just 19 games.

The Phillies look to continue their striking success in San Diego Friday night as local boy Cole Hamels performs for the home folks against the Padres' Clayton Richard. 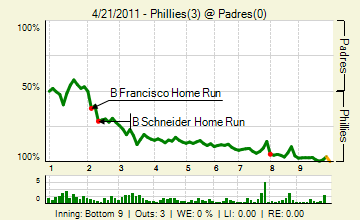