While Gerald Ford's administration issued an executive order precluding the use of assassination as a foreign policy tool, Cole Hamels did not get the memo.  He was ruthlessly efficient in a homecoming of sorts.  The San Diego native went eight strong innings, finishing with a flourish in the eighth inning with two srikeouts to go with a pop-up.  Fittingly for Petco Field, it was a night for pitching, and Hamels did not disappoint.

Eight strikeouts against three walks (one intentional) and only four hits over eight innings kept the Padres off the board.  On a night when the bullpen needed a breather, Hamels came through with a masterful 126 pitch performance.  Is this heaven?  Nope.  It's California.

The offense was provided by Ryan Howard, who drove in Rollins and Polanco with a two-out triple in the third inning.  Hamels engaged in a little self-help with a pair of hits, but these resulted in little else besides some light comic relief as Hamels was picked off after the first.

The fifth shutout of the year for the Phillies was completed by Ryan Madson who, tonight at least, was able to demonstrate that he can Close Games, Too.  Madson faced three hitters, retiring all three with much less, erm...flair than Jose Contreras has had of late.  It was downright boring.  Which was nice for a change.

Nevertheless, the shutout win truly belonged to Hamels.  It was a gem, and it was nice to see a performance like this from Hamels result in a win for him, and, more importantly, the Phillies.

Clayton Richard was effective for the Padres, giving up just the two runs, but he had no help from the hitters on his team.  The Fangraph of Suffocation (tm) shows a game that was always close, but one that the Padres never really were able to make competitive because of Hamels' steller evening. 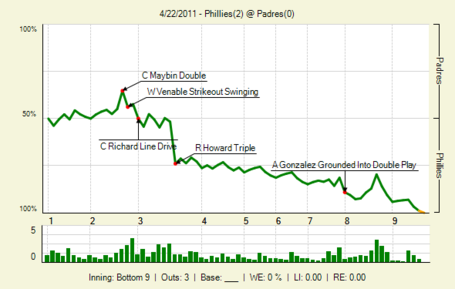