War and Piece: Phillies down Padres 4 - 2 on RBI double by Ryan Howard

Share All sharing options for: War and Piece: Phillies down Padres 4 - 2 on RBI double by Ryan Howard

Ryan Howard's golden sombrero was threatening to turn into a platinum one as he came to the plate in the eleventh inning of tonight's Phillies-Padres game at Petco Field.  Howard had been thwarted all night by Padres pitching, leading Bud Black, the erstwhile Grand Moff Tarkin, to make a decision to intentionally walk Jimmy Rollins to get to Howard.  Black brought in Cory Luebke to play the role of LOOGY. It is a decision Black probably would like to have back.  Howard struck a long, but catchable ball to left fielder Ryan Ludwick.  Ludwick could not handle it at the fence after briefly appearing to make the grab.  Two runs scored, giving the Phillies a 4-2 lead.  Howard was thrown out trying to score later in the inning, but the damage was done.  While Howard's game-winning hit provided the most drama, this was a typical extra-inning win where many Phillies contributed in ways that kept the game alive until Howard could, during a moment of high drama, blow up the Death Star.

Howard's game-winning hit occurred after what was a frustrating offensive game.  Many games against the Padres at Petco Field result in low-scoring games where pitching dominates.  This game was not surprising in that respect.  The Phillies' offense was handled for the first ten innings by a strong effort from San Diego's starter and bullpen.  Tim Stauffer, who went 6 innings for the Padres, gave up two runs, surrendering just one walk to go with seven strikeouts.  San Diego's bullpen then held the line, and it appeared at times as though another run would never be scored.  By the time the eleventh inning rolled around, the Padres were through their best relievers, and the war of bullpen attrition between the teams finally came to an end when Chad Qualls and Luebke presided over the meltdown.

For the Phillies, Joe Blanton pitched seven innings, scattering 8 his and two walks before giving way to a pinch hitter after 93 pitches.  He struck out only 3 hitters, but when in Petco, it is perhaps not a bad idea to let the fielders help you out.

After Blanton left, the Phillies had effective relief outings from the much-maligned Danys Baez and Kyle Kendrick.  Baez went 1-2-3 in the eighth inning.  Antonio Bastardo, not among the maligned, struck out the side in the ninth inning, with the last coming on a 95 mph fastball.  Kyle Kendrick had a remarkably unremarkable tenth inning before giving way to Ryan Madson, who did not lack for Closer Mentality on this evening.  The Soft Underbelly of the Phillies bullpen came through in a big way tonight.

Other than Howard, the Phillies had little in the way of offensive contributors. This was probably not helped by the fact that manager Charlie Manuel rested regulars Carlos Ruiz and Placido Polanco, but the Phillies are not getting any younger.  They will need to win games even when resting important offensive contributors. Rollins had a hit, an RBI, and two walks, one the intentional walk at the end of the game.  Placido Polanco contributed a huge pinch hit to start off the eleventh inning.

The Padres took an early lead when Jason Barrett tripled in Cameron Maybin in the first inning.  Blanton wriggled out of the first without letting Bartlett come home from third with no outs.  Blanton's effort here was long forgotten in the delirium and exhaustion hours later, but this was a critical moment of the game.  Blanton came through it in a big way.  Following Bartlett's hit, Orlando Cabrera walked.  The next batter, Nick Hundley, hit it to Blanton, who fielded it, throwing to Wilson Valdez at third, and Bartlett was run down at home.  Blanton still had trouble, since Cabrera and Hundley went to third and second in the confusion.  Blanton still needed two more outs.  Jorge Cantu obliged with a shallow fly to right.  Blanton then struck out Ryan Ludwick and escaped without serious damage.

Ben Francisco and Jimmy Rollins drove in the early runs for the Phillies.  Francisco's triple to score Rollins in the 4th tied the game at 1 -1.  The Padres broke the tie the next inning on Nick Hundley's double to left.   Rollins drove in the tying run in the 6th, and the score remained tied until the fireworks in the eleventh.

With the Marlins losing, the Phillies gain a much-needed game in the standings and they head into Sunday's finale in good shape, sending Roy Halladay to the bump. 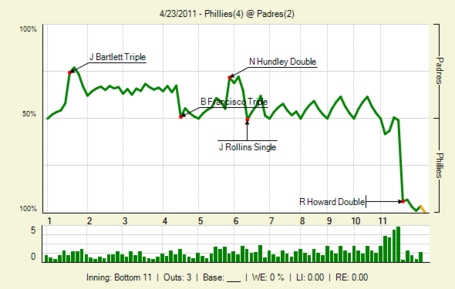