The Phillies likely will board the plane to Phoenix this evening with considerable reluctance to leave San Diegoafter finishing off a four-game sweep of the Padres to stretch their Petco Park winning streak to 11. They haven't tasted defeat there since August 16, 2008, when Kyle Kendrick took the loss by an 8-3 score. Kendrick wasn't on the mound for the series finale Sunday, though given San Diego's offensive struggles, both he and the Padres likely wished he were. Instead, the Phils sent Ace of Aces Roy Halladay to the hill, coming off his worst start of 2011. San Diego countered with Wade LeBlanc, making his 2011 debut.

The teams matched zeroes until the sixth inning, when the Phillies got a leadoff single from Jimmy Rollins and Ryan Howard followed with a hit under the glove of first baseman Brad Hawpe. Ben Francisco singled just out of the reach of left fielder Ryan Ludwick to score Rollins, and John Mayberry Jr--getting a start in left for slumping Raul Ibanez--boomed a double to the left field cover to plate Howard for a 2-0 Phils lead. An intentional walk to Carlos Ruiz loaded the bases, but Michael Martinez hit into a fielders choice to force Francisco at home and Halladay ended the threat by hitting into a double play. The Phils stretched the lead to 3-0 an inning later when San Diego's Will Venable dove for a Shane Victorino liner that bounced off his glove and rolled away, setting up the Flyin' Hawaiian for a dash around the bases that culminated with a successful flop on home plate for an inside-the-park homer.

The way Halladay was goings, 3-0 probably looked like 30-0. After allowing baserunners in each of the first three innings (albeit just a walk and two singles, while striking out five), Doc kicked into Beast mode, retiring the side every inning from the fourth through the eighth while striking out nine more. Charlie Manuel sent him out for the ninth despite a pitch count over 110, and the Padres nearly made him regret it: Cameron Maybin led off with a hard single, and after Jason Bartlett reached on a fielder's choice, Chase Headley blooped a single to center to bring the tying run to the plate. Ludwick followed with a long, loud out that settled into Victorino's glove maybe 390 feet from home plate, and Venable broke up the shutout with a single up the middle that scored Bartlett. At 130 pitches, Halladay finally gave up the ball--and it took Antonio Bastardo all of one pitch to induce a flyout from Nick Hundley that ended the game and earned Bastardo his first career save.

While it's of at least slight concern that Halladay has thrown 579 pitches through his first five starts (478 through his last four), the appearance of Bastardo rather than Jose Contreras when Doc finally did tire both suggests what Manuel was thinking and presents another cause for worry. Still, the team is riding a season-high five game winning streak they'll look to stretch to six behind Cliff Lee when that plane touches down for a three-game series against the Diamondbacks. 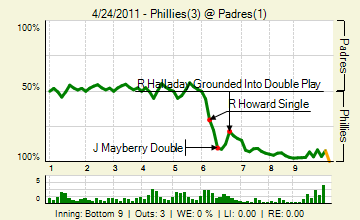