Perhaps Phillies fans expected to see a complete game shutout by an efficient pitcher giving up only 3 hits, striking out ten batters, and walking none.  It is likely that few of those fans would have expected the performance from Ian Kennedy rather than Cliff Lee.

Lee was not terrible - in seven innings of work, he used a characteristically efficient 102 pitches, walked just one, struck out twelve, and gave up only 5 hits.  Unfortunately, two of the hits were home runs - one to Chris Young, and the other to the immortal Gerardo Parra.  With no credible threats from the Phillies all night, the four runs might as well have been forty.

Placido Polanco provided the only offensive highlights for the Phillies, unless you include Ryan Howard's on-air invective, captured to the delight of the television audience, as an "offensive outburst."  Howard's two strikeouts, his 4,192nd and 4,193rd of the young season, resulted in game stoppages as MLB officials presented him with the adamantium sombrero for his performance for the first month of the season.  There was a touching moment when Howard's giant relatives cried and the subsequent tears drowned the D-Backs ballgirls as a techno rendition of Grofe's "Cloudburst" played over the stadium sound system.  Polanco's two hits, including the only extra-base hit, a bases-empty double in the first, were twice as many as the rest of the Phillies could manage.

Michael Stutes made his MLB debut in the eighth, pitching a scoreless inning with no baserunners and striking out one.  This just had the feel of "one of those nights" where nothing was going to break right for the Phillies.  It was a stinker. Go get 'em tomorrow.

Tomorrow, it is expected that the vacationing WholeCamels will return the tiki statue to its rightful place before the Phillies play their next game.  Tonight's game was, of course, entirely his fault, as evidenced by the Fangraph below: 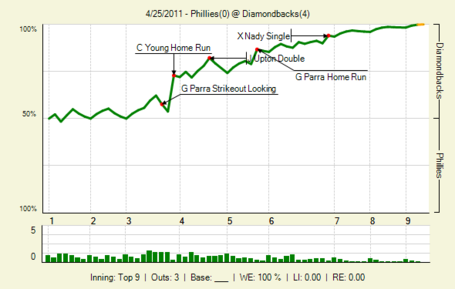