The Phillies actually got a few extra base hits in the first inning and managed to plate a run, perhaps leading some to believe that they had turned the corner on this most recent offense dry spell. It proved to be false hope, however, as Roy Oswalt turned in a rare clunker and the offense--which actually managed to get a decent number of baserunners against a quite hittable Daniel Hudson--couldn't get the big hit with runners on.

Oswalt's stuff was uncharacteristically bad tonight, which became painfully apparent in the second inning. With the Phillies up 1-0, Oswalt recorded the first two outs with a Stephen Drew Miguel Montero single sandwiched in between. He then proceeded to walk Juan Miranda and allow a single to Gerardo Parra to load the bases plate one run. The runners advanced to second and third on the throw for the pitcher Hudson. After falling behind, Oswalt delivered a meatball that Hudson cranked to right for a bases-clearing two run double.

The Phillies answered with one run in the top of the third on a Ryan Howard single, but the inning showed so much more promise. Ben Francisco and Raul Ibanez each popped out with runners on the corners to put the kibosh on the threat. In the bottom half of the inning, the Diamondbacks tacked on two more against Oswalt, opening up a 5-2 lead. For a team that has not scored more than 4 runs since the beginning of the month, this would be a tough mountain to climb (speaking of climbing a mountain, WholeCamels did that today...hooray WholeCamels).

With Oswalt gone, the Diamondbacks tacked on two more runs. One against Mike Zagurski on a Ryan Roberts homer and another against David Herndon in particularly aggravating fashion. With two outs in the bottom of the seventh, Kelly Johnson grounded to first, but Herndon failed to cover the bag. Johnson then stole second and moved to third on a wild pitch. And then, of course, he scored on a Justin Upton single.

The score now 7-3 going into the top of the ninth, the Phillies managed to plate a few meaningless runs on a Ben Francisco homer before the free-falling Raul Ibanez flied out to end it.

They'll look to avoid the sweep with Cole Hamels going against Joe Saunders tomorrow. Again, it's hard to believe this team is 15-8. 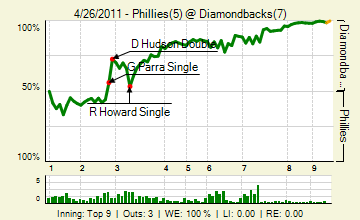