Share All sharing options for: Piece on Earth: Phillies 10, Mets 3

Let's face it: Ryan Howard is pretty much a guess hitter. When he guesses wrong, you get strikeouts and weak grounders. When he guesses right, pitchers can consider themselves lucky if they keep him in the ballpark.  The strikeouts are easy enough to stomach when he is also guessing right a decent percentage of the time.

Tonight, Howard made some good guesses and the Mets pitchers could not consider themselves lucky.

The Phillies bats helped the inferior version of Kyle Kendrick, BIG PELF, cruise through his first three innings, with just two base hits over that span. But things changed quickly the second time through the order. Jimmy Rollins led off the top of the fourth with a single to bring up Howard. Pelfrey's next pitch, an 89 mile per hour, waist high fastball that ran back across the middle of the plate, soon found itself 425 feet away from home plate in the second deck of the right field stands. Good guess; 2-0 Phillies.

Pelfrey was chased the following inning after loading the bases with one out on singles by Victorino and Polanco and a Howard HBP and allowing a two RBI single to left by Ben Francisco. Dillon Gee entered for Pelfrey and put out the fire.

Gee, not one to be mistaken for anything but a pyromaniac, began a bonfire of his own with a walk of Brian Schneider to begin the bottom of the sixth. A Shane Victorino HBP followed by passed ball put runners on second and third with one out. Victorino was erased on a fielders choice thanks to a baserunning error by Schneider, but Rollins was walked on four pitches to bring up Howard with the bases loaded. In a 2-2 count, Howard guessed fastball and that's just what he got. Howard muscled the pitch, which appeared to jam him a bit, a few rows deep into the right field stands for his tenth career grand slam. Strong man; 8-0 Phillies.

The Phillies tacked on two more in the bottom of the seventh on a two-out, bases-loaded single by Polanco against Ryota Igarishi to cap off their scoring at 10.

Am I forgetting anything? Oh, right, the pitching!

Filling in for the recently DL'd Blanton, Vance Worley was effective in just his third career major league start. In six innings, Vance Gogh painted the corners nicely and racked up five strikeouts while allowing just two hits. He did allow four walks, but that can be excused somewhat as home plate umpire Gary Cederstrom's strikezone was less than consistent at times. The few times Worley found himself in trouble he was able to induce timely pop-outs and double plays. All around, it was a rather encouraging start from the kid who will hopefully continue to be called on over the execrable Kendrick in Blanton's absence.

Stutes and Baez each contributed clean frames and the score was 10-0 heading into the top of the 9th. But then Herndon came on and surrendered an absolute bomb to dead center by Ike Davis and a two run shot to right by Jason Pridie. I don't count myself among the now fashionable Herndon haters, but something is clearly not right with him at this point. Keeping him with the major league club will simply do him no good.

Other than that late game blemish, though, it was a fantastic night. Isn't it nice to score runs again? 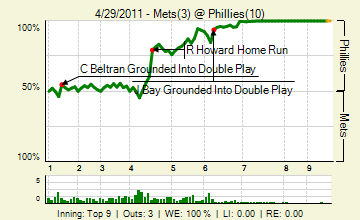