Share All sharing options for: No Sweat: Phillies 7, Astros 3

Well, the Phillies' opening series went about as well as anyone could have expected.

Behind three predictably strong outings by the first three aces and a somewhat surprising offensive showing, the Phillies kicked off the season with a three game home sweep for the first time since 1899.

On this sunny Sunday afternoon, Roy Oswalt took the hill and pitched a mostly drama-free six innings in which he allowed two runs on five hits. His stuff appeared to be in midseason form as he added six strikeouts. He departed after just 88 pitches--for a suddenly healthy Shane Victorino. Aside from a fourth inning solo shot by Hunter Pence and a two-on, one-out jam in the sixth that he escaped after allowing just one run, the only real negative came in the top of the fifth when Oswalt ended a 17 and 2/3 inning walkless streak by Phillies starters with a base on balls to Michael Bourn.

Meanwhile, the offense came blasting out of the gate against spot starter Bud Norris, who was filling in for an injured JA Happ. Following a Polanco walk and a Rollins single in the bottom of the first, Ryan Howard was given a green light with a 3-0 count. And just like that, the score was 3-0 as Howard crushed his first home run of the season into the home bullpen. Ben Francisco also added a solo shot in the same inning. Those four runs would prove to be enough.

The Phillies tacked on a run in the third when Howard nearly took another 3-0 out, this time doubling off the top of the right field wall. Howard finished the day a triple short of the cycle. The Phillies capped off their scoring with back-to-back RBI singles by Shane Victorino and Michael Martinez (his first career major league hit). Jimmy Rollins was the real spark plug today. He went two for three with two walks in a very leadoff hitter-esque performance. Good to see.

David Herndon pitched two solid innings in relief and Kyle Kendrick looked pretty awful in the ninth, surrendering a run and causing Charlie Manuel to get Jose Contreras up in the bullpen. 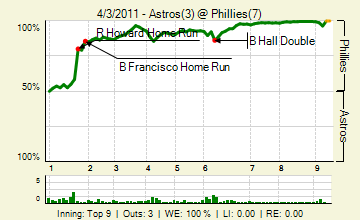