Halladay Means No Offense: Mets shut down, lose 2 - 1 to Phillies

Share All sharing options for: Halladay Means No Offense: Mets shut down, lose 2 - 1 to Phillies

The last day of April brought the Mets to Philadelphia for the second game of a three game set.  The Phlllies looked to square away the best record in the formerly difficult month of April since 1993, when they finished 17 - 5.  The Phillies have never won 18 games in April before.  The winning percentage of the 2011 club in April is the fourth best in team history.  For all the kvetching I have done this month, this is a special team. They performed at an extremely high level, especially considering the injury bug that has struck over and over.

Maybe now we all can look forward to the end of annual stories like this, or this, or this.  The "slow start in April" may have hurt the Phillies for several years prior to the 2008 championship season, but the team has had winning records for the month starting that year, making this the fourth one in a row.  Can there be a "hot starting Phillies" meme now?  That's certainly the reality.

Not only was this the capstone on a fabulous month for the team, it was a competitive game with some outstanding individual performances from the players, both for the game and the month  Both Halladay and Polanco deserve some special attention.

Halladay pitched a complete game in just 107 pitches.  He started the game by throwing 18 strikes.  It is believed that this is the first time this has happened in approximately 20 years, since Sid Fernandez did it in 1991.  In addition, the 19th pitch came in the third inning.  He completed two innings in 11 pitches.  Halladay gave up 7 hits, 1 walk, and 1 run against 8 strikeouts over the nine innings he pitched.

He was frighteningly efficient.  Halladay's Game Score was 76 today, which would have placed him in 10th place on the 2010 list of best-pitched games by Phillies pitchers.  On the heels of the 4/24 game against the Padres where his Game Score was 83, we have all seen two sparkling performances from a pitcher who is completely on top of his game.  Even better, the pitch count today was 107, markedly lower than the 130+ thrown in the last outing.

Despite Halladay's mastery of the Mets, it appeared as though the slumbering offense might waste the effort.  After coming alive recently, with over twenty runs over the last three games, the Phillies could not generate a run until the seventh inning when they were in a one-run hole.  In the seventh, John Mayberry hit a solo shot to tie the game.  His fake dad was pleased.

Continuing with the seventh inning, the Phillies went ahead on a sac fly by Placido Polanco.  Placido Polanco - where to start?  In addition to driving in the game-winning run, he had two more hits today, giving him 41 for the month of April.  No Phillie player has ever had more hits in a month.  His OPS on the season is .972.  His WAR this season is already at 1.3.  It is unsustainable, but it has been a tremendous pleasure to watch.  It leaves all of us to wonder what might have been, had the Phillies kept Polanco instead of trading him way back when.

Aside from Halladay and Polanco in the headlines today, the lineup had a number of familiar faces playing more substantial roles:  Mayberry, Francisco, Sardinha, and Valdez.  Looking back to the team that started Game 5 of the 2008 World Series, or even Game 6 of the 2009 World Series, this was a very different lineup.  It is fair to wonder if age and injuries may not be forcing the Phillies to make some changes.  It may be temporary until some of the familiar, but missing, faces start to come back from injuries, but it was good to see that this lineup was enough on this day to cap off an historic month for the Phillies. 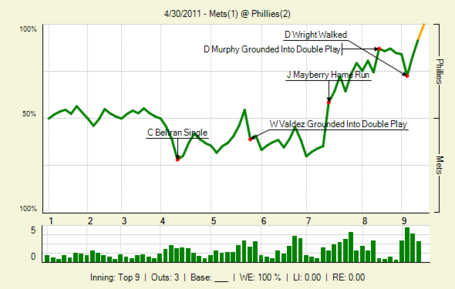