The Phillies dropped their first game of the 2011 season in resounding fashion tonight, losing a 7-1 contest to a possibly resurgent Chris Young and the New York Mets at a cold and windy Citizens Bank Park.

Cole Hamels, the fourth ace in the Phillies' vaunted rotation, laid the rotation's first egg, allowing six runs and seven hits in just 2 2/3 innings pitched despite not allowing very many hard hit balls.  After wriggling out of a second-and-third, nobody out jam in the first, the vile strumpet Miss BABIP had Hamels' number in the third inning, not to mention an erratic strike zone from home plate umpire Chris Guccione.  Hamels didn't really do himself any favors, showing poor command, walking two and hitting one batter.  The six earned runs in the third inning were the most allowed in any single inning for Hamels in his career.

Chris Young was the story for the Mets, striking out seven and allowing just one run in 5 1/3 innings pitched, as well as picking up three base hits. The Phillies were unable to string together very many baserunners, including a combined 0-for-13 from Shane Victorino, Ryan Howard, and Ben Francisco, despite two very long, loud flyouts from Francisco that on a non-Arctic night probably would have been out of the yard.  Mets third baseman was 4-for-4.

Bad games happen.  This was one of them.  See ya tomorrow. 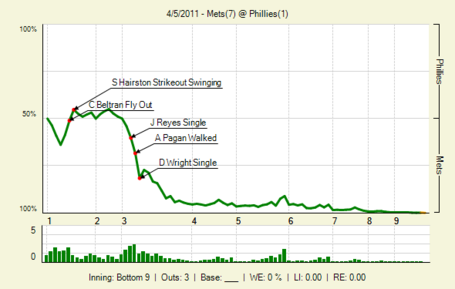