For the first three innings, it looked like the Phillies were on pace to flip the script on the Mets from Monday night's 7-1 ApocaLoss (tm), when the New Yorkers derailed a putative 162-0 season and showed the utter sub-replacement level worthlessness of Cole Hamels. The Phils put up seven runs in the first three innings to chase Mike Pelfrey, highlighted by a Ryan Howard solo homer and a two-run single by pitcher Joe Blanton--obviously doing his best Chris Young imitation--off reliever Taylor Buchholz. Time to sit back, enjoy the Phanatic's antics and wait for the postgame handshakes, right?

Wrong. The Mets got two back in the fourth on an Angel Pagan homer, then came back to tie it in the fifth. Blanton started the inning by striking out pinch-hitter Daniel Murphy, but then saw seven straight batters reach base before departing with the bases loaded and the Phils clinging to a 7-6 lead. Antonio Bastardo struck out Josh Thole, but Murphy made his second at-bat of the inning count with a run-scoring single before Jose Reyes lined out to end it.

But with the suicide line forming at the Walt Whitman Bridge, New York reliever Blaine Boyer couldn't sustain the Met-mentum. He got the first two outs in the bottom fifth, but Shane Victorino doubled and scored on a Placido Polanco single to put the Phillies back ahead. Polanco came around to score two batters later when Howard reached on an infield single, and Ben Francisco's solo homer to lead off the bottom of the sixth made it 10-7.

The Phils' bullpen did the rest, recording the final 14 outs without allowing a run. Bastardo earned the win with an inning and two-thirds of one-hit, two-strikeout relief, and J.C. Romero, Ryan Madson and Jose Contreras each followed with a scoreless frame. Howard finished the night 4 for 4 with a walk, a homer and two doubles.

Roy Halladay seeks his first win of the season in the series finale tomorrow afternoon, against Jon Niese of the Mets.

If you missed tonight's action, it looked something like this: 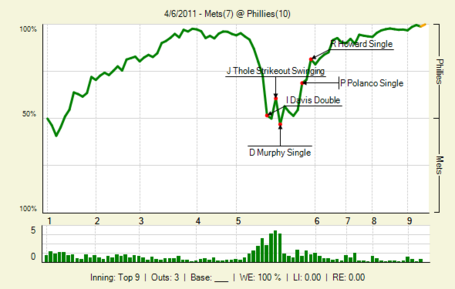