Powered by 7 innings of shutout ball during which Roy Halladay escaped some early jams, the Phillies scored runs in five of the eight innings when they came to the plate.  Chase Utley, following face-transplant surgery, wore the jersey of Wilson Valdez and had a 4 hit game, scored 3 runs, and played well in the field.

Halladay was victimized early by a couple of broken bat singles and some seeing-eye singles, but managed to emerge unscathed.  When he needed to dial up a big strikeout, such as in the Mets' third against David Wright, he did it.  At the time, the Mets had the bases loaded with one out.  Halladay then induced a ground ball out from Ike Davis, and the Mets' most-serious threat of the day ended, coming to nothing.

In the Phillies' half of the third, the hit parade began.  Valdez led off with a single, was sacrificed to second by the Giant Halladay Robot, and was driven in by Shane Victorino and some throwing foolishness from outfielder Angel Pagan.  A double from Placido Polanco drove in Victorino, and the Phillies had the only two runs they would need all day.  The rest of the offense, while enjoyable for Phillies partisans, was as necessary as an appendix.

Halladay ended up with 113 pitches over 7 innings, including 7 strikeouts and only one walk.  The six hits scattered were largely inconsequential, with David Wright hitting the only extra-base hit of the day for the Mets -- a meaningless double in the eight inning when the outcome was not in question.

Danys Baez and David Herndon pitched effective innings in the eighth and ninth innings to bring the game home for the Phillies without allowing the Mets to mount a rally.

After the heartburn from the rally the Mets put on yesterday and the ugly loss on Tuesday, this was a welcome game.  The bats worked, Halladay shot death rays from his eyes, and the bullpen managed to get by without being noticed.  It was a good day. 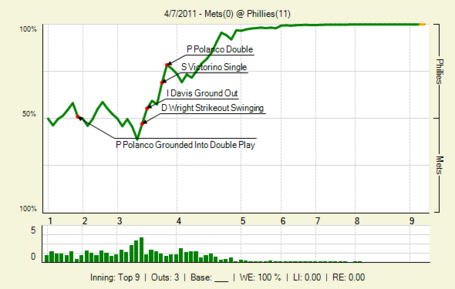