Despite jumping out to a quick 3-0 lead after their first two times at-bats, the Phillies couldn't score again, and starter Cliff Lee got shellacked by the Braves lineup en route to a 6-3 defeat tonight in Atlanta.

The trouble started early, with Lee issuing a rare walk to Brian McCann in the first, and showing poor command.  Unlike Cole Hamels in his first start, the Braves truly hit Lee hard throughout his 3 1/3 inning outing, punctuated by a bases loaded, bases-clearing double in the fourth inning from Chipper Jones off the glove of center fielder Shane Victorino that made the score 6-3, where it would stay.

Early on, Braves starter Tim Hudson fell victim to a lot of the BABIP magic that the Phillies hitters have worked throughout most of the young season.  The Phillies missed a chance to climb back into the game in the fifth inning, loading the bases with one out for red-hot Ryan Howard.  It was not to be, however, as Hudson induced a check-swing grounder for the dreaded 1-2-3 double play to end the threat.  It was smooth sailing for Hudson from there out, with the right hander eventually finishing 7 2/3 innings with eight hits and two strikeouts.  Jonny Venters and Craig Kimbrel closed it out for Atlanta.

If there's one good takeaway from tonight's game, it was the performance of the Phillies bullpen -- Kyle Kendrick, Antonio Bastardo, and J.C. Romero combined for 4 2/3 innings of two hit, two walk relief, with Bastardo looking especially impressive, striking out the side in both of his innings of work, and allowing a single hit -- which just happened to be the 2,500th base hit of Chipper Jones' career. 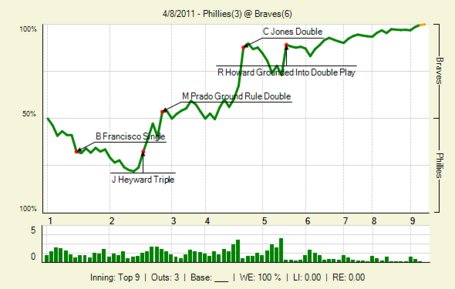