Share All sharing options for: Pinch Me: Phillies 10, Braves 2

The annual start of the baseball season can be counted on to do two things: trigger cheesy yet valid professions of renewal and mystical connection to a cherished (and half-mythical past), and make purveyors of conventional wisdom look like drooling morons on a bunch of the storylines they carried to Opening Day. So it's been in early April 2011 with the Phillies. A starting rotation everyone thought--nay, knew--would carry the has seen its starters not named "Roy" put up a collective 11.42 ERA in their first four starts; an offense that was tagged as too old and too dependent on the home run is averaging seven runs a game; and a bullpen foreseen as the team's Achilles' heel has held opponents off the board in game after game.

The only thing that's gone more or less according to expectations is that the team has been winning. That happy trend continued in Atlanta Saturday as the Phillies turned a tight game into a rout with a five-run seventh inning en route to a 10-2 win. Roy Oswalt finally earned a win over the Braves in his 10th career appearance against them, working six solid innings to improve to 2-0 on the season, and Carlos Ruiz came off the bench with a pinch-hit grand slam in the seventh and stuck around to contribute an RBI double an inning later. Fellow catcher Brian Schneider, who started the game, had put the Phils ahead 3-2 with a two-run homer off Braves starter Brandon Beachy in the fourth. The Phillies banged out 15 hits in all, with Shane Victorino (4-5) and Jimmy Rollins (two doubles) supporting Ruiz on the offensive side. David Herndon, J.C. Romero and Danys Baez each threw a scoreless inning of relief to finish up.

Things nearly went very differently. With two outs and none on in the sixth, Oswalt suddenly ran into trouble when he allowed a Chipper Jones single and walked Brian McCann and Dan Uggla. But he buried a pitch in on the hands of Atlanta's Jason Heyward, who popped out to Placido Polanco at third to end the threat. In the top of the next inning, Raul Ibanez led off with a double, John Mayberry--pinch-hitting for Schneider against lefty reliever George Sherrill-- flared a single into left, and Wilson Valdez walked. With Scott Linebrink in for Sherrill, Ruiz hit for Oswalt, quickly fell behind 0-2, then bombed his first career grand slam and first career pinch-homer out to left, stretching the Phillies' lead from one run to five.

Michael Martinez pinch-hit for Herndon in the eighth and singled, coming around to score on Ruiz's double. On the day, Phils pinch-hitters were 3 for 3, improving their season mark to an amazing 10 for 16.

Cole Hamels looks to step up for the non-Roy starters in the series rubber game Sunday afternoon, facing the Braves' Derek Lowe.

Edit: by popular request, the Fangraph... 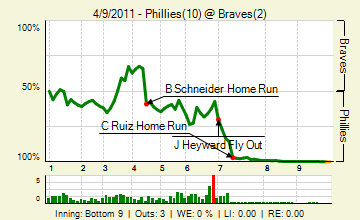