In his first start since being placed on the DL a few weeks ago with elbow trouble, Joe Blanton was clearly a bit rusty against the Marlins tonight. He allowed eight hits--a number of them well struck--and three earned runs in just five innings of work and recorded an underwhelming two strikeouts along with two walks. It wasn't all bad though. One encouraging sign from this performance was his stellar 10:3 GB:FB ratio. Four of those groundballs turned into double plays, which helped keep his pitch count at a manageable 66.

It was a very oatmeal cookies performance; an adequate snack, but as Blanton continues to shake off the rust and returns to full health, we can expect him to return to his usual, superior chocolate chip self.

Against the horrendous Javier Vazquez, though (it's amazing to think that just two years ago, this guy was one of the best pitchers in the league), oatmeal cookies were just fine. From the very first batter, the Phillies pounced on Vazquez. Jimmy Rollins led off the game with a home run that (with some help from Mike Stanton) just cleared the wall in right. The Phillies followed with three runs in the third and two more in the fifth to chase Vazquez after just 4 and 1/3 innings.

They were unable to muster anything more against the Marlins' solid bullpen, but six runs would prove to be enough. Vance Worley came on and three strong innings in relief of Joe Blanton. He allowed just one run on an eight inning homer by Gaby Sanchez and recorded two strikeouts with two walks. The kid continues to impress.

Despite lacking the ability to pitch in the ninth inning, Ryan Madson came on and lucked his way through another scoreless ninth for his fourth save. That the Phillies only needed to use two relievers when their starter logged just five innings is a win. That the game was somewhat close and they hung on to win given these circumstances is a double win. 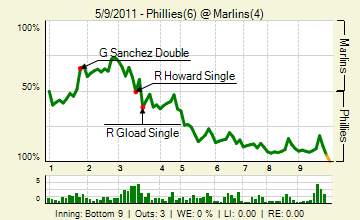