The heavyweight bout between the Marlins Josh Johnson and Phillies Roy Halladay ended about how we all expected -- a close, tense pitchers' duel -- ultimately resulting in a Marlins 2-1 victory, with Halladay taking the complete game loss.  But it took some weird turns getting there.

The Phillies struck first, scoring their only run on a Ryan Howard opposite field home run to lead off the second inning.  Raul Ibanez followed up with a double, and after Ben Francisco got hit by a pitch and Pete Orr drew a walk, the bases loaded, no out situation looked promising.  But Josh Johnson retired Dane Sardinha, Roy Halladay, and Jimmy Rollins in order to end the threat.  The Phillies loaded the bases again in the third, this time with two outs, but Pete Orr grounded into a fielder's choice to finish it off.

The Marlins tied it up in the bottom of the third, and we saw something... odd.  Roy Halladay issued a full count walk to Josh Johnson, the first time in his entire career that he's walked the opposing pitcher.  After a Chris Coghlan double, Johnson strolled home on a deep Emilio Bonifacio sacrifice fly.

After that, Johnson and Halladay went into Shutdown Mode.  The Phillies never seriously threatened again, and the Marlins needed a handout to break through.  Shortstop Jimmy Rollins' throwing error in the bottom of the eighth allowed Omar Infante to reach.  Infante advanced to second on a (very catchable) wild pitch, and later scored on a Coghlan single, making the score 2-1, where it would stay.

Marlins closer Leo Nunez worked a hitless ninth for the save, walking John Mayberry for his only baserunner. 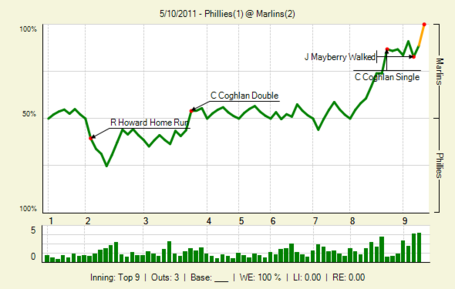