Share All sharing options for: Get YOrr Shinebox: Phillies 5, Marlins 3

Merely two outs into the game after last night's debacle, Hanley Ramirez nearly sent everyone home early to get their Heat Party started by whacking a Cliff Lee pitch thousands of inches away high into left field for the early 1-0 lead, signaling doom and discombobulation for the offensively inept Phillies.

Why? Because for yet another night, the Phillies were enmeshed in a pitching duel, as Lee and Marlins starter Ricky Nolasco threw down zero after snoozy zero after Ramirez's homer.

And then an uneventful game got gradually less so. Or moreso. Heck, you know what I mean. A bunch of stuff happened. Like:

In the top of the 5th, an unseen assailant shot Phillies catcher Brian Schneider in the left hamstring as he rounded third after Cliff Lee hit a hard liner that Marlins second baseman Omar Infante could not handle. As the ball caromed into center field and third base coach Juan Samuel waved Schneider home, the Phillies backup catcher instead limped back to third base before being removed from the game. In this way, the Dane Sardinha catching era began in earnest for the Phillies, and Jimmy Rollins celebrated this latest impending move to the disabled list with an inning-ending groundout to second.

The Marlins then moved in for the kill in the sixth. With one out, Emilio Bonifacio, Hanley Ramirez, and Gaby Sanchez  all singled to load the bases against Lee. John Buck then singled in Bonifacio to add a run, and Mike Stanton smacked a sacrifice fly to center to make the distance a seemingly Grand Canyonesque 3-0.

But the Phillies offense, seemingly ignored in the breakdown lane, finally got a jump in the seventh inning from the bench (the bench!). After Raul Ibanez doubled to lead off the inning, one one out later Marlins first baseman Gaby Sanchez erred on a Sardinha grounder to put runners on first and third. Pete Orr, pinch hitting for starter Wilson Valdez, then doubled, knocking in Ibanez and moving Sardinha to third. Ross Gload then batted for Lee, and hit a grounder to score the second run.

After displaying his inexhaustible supply of compromising photos of Ruben Amaro, Dave Montgomery, and various members of the ownership junta to Phillies manager Charlie Manuel, Kyle Kendrick and his Incredible Ability to Pitch More that One Inning(TM) came in to pitch the eighth inning. Or, maybe Manuel's Gut(TM) was on a roll after productive outings by Orr, Romero and Gload, so he must have felt like he was playing with house money. Whatever it was,  Kendrick walked Bonifacio, then got Hanley Ramirez to pop up into a profound infield sulk. After a single to Sanchez, Kendrick then retired John Buck and the Marlins on a 5-4-3 double play.

In the 9th, Sardinha singled off Marlins closer Leo Nunez, then lumbered over to third on Pete Orr's second double of the evening. After pinch-hitter John Mayberry, Jr. struck out, Mr. Clutchy McSlugger(TM) of the Night Jimmy Rollins singled to left field, scoring Sardinha and the speedy Orr, who just beat the throw and Buck's tag with a lovely skillful slide.

Still Proving Himself Closer(TM) Ryan Madson ended the game by retiring the Marlins in order in the ninth. And Kyle Kendrick FTW!

After an off day tomorrow, and a night spent basking in the healing waters of the Fountain of Yutes in Clearwater, the Phillies travel on to Atlanta Friday night, when  Cole Hamels will start against Friendo Beachy. 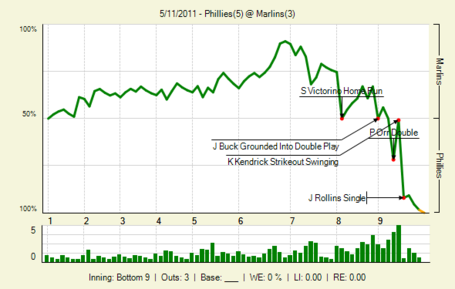