The Phillies claimed one of their less probable and more sweet wins of the early going in 2011 to open a three-game set in Atlanta Friday night, thanks mostly to Ryan Howard's heroics, a troika of clutch relief stints by unheralded youngsters and one of the more egregious consequential blown calls we're likely to see this season.

The Big Piece furnished Cole Hamels a 3-0 lead before he even took the mound with a three-run homer in the top of the first against Braves starter Brandon Beachy. Hamels gave one run back in the bottom of the inning, though with Beachy scuffling with 55 pitches through his first two innings, it seemed like additional runs wouldn't be hard to come by.

But Beachy left the game with an injury while warming up for the third, to be replaced by Cristhian Martinez. All Martinez did was strike out the side in the third to start four spotless innings--and if that weren't enough, he delivered the big hit as the bottom of the Braves lineup rallied to tie the game in the fifth. Alex Gonzalez led off the inning with a single, Joe Mather followed with a double and Martinez delivered a double to score both runs. But Hamels kept his cool even after a Placido Polanco error put Martin Prado on; after a Nate McLouth bunt and an intentional walk to Chipper Jones that loaded the bases, Hamels induced Brian McCann to ground into a double play that kept the score tied at 3.

Atlanta went ahead an inning later, again thanks to the bottom of the lineup. Gonzalez singled, this time with two outs, and Mather moved him to third on a ground rule double--evidently a big break for the Phils. But Hamels bounced a pitch that newly activated Carlos Ruiz couldn't handle, scoring Gonzalez to give the Braves a 4-3 lead. It looked like Atlanta would carry that advantage through the seventh, as reliever Eric O'Flaherty seemed to have caught Shane Victorino looking at an 0-2 fastball with two outs and Jimmy Rollins on second; catcher McCann was halfway to the home dugout before home plate ump David Rackley made it clear that he deemed the offering a ball. A few pitches later, Victorino bounced a single up the middle that scored Rollins to tie the game at 4.

The Braves mounted another threat in their half of the inning, as J.C. Romero loaded the bases with one out on a Prado double, a sacrifice from McLouth, an intentional walk to Jones and an unintentional--but four-pitch--walk to McCann. On came rookie Michael Stutes, who fell behind Dan Uggla, evened the count on a very long, very loud foul ball... and got Uggla swinging on an offspeed pitch for the second out. He then gave way to Antonio Bastardo, who dug an even deeper hole by falling behind 3-0 to Freddie Freeman, bringing it back even, and blowing a third strike by the Braves rookie. The score stayed at 4-4.

Then Howard stepped up again, leading off with a double off the lefty O'Flaherty. After Ben Francisco struck out, Raul Ibanez guided a seeing-eye single past Freeman at first and Uggla at second that Joe Mather, subbing in right field for ailing Jason Heyward, charged. Third base coach Juan Samuel made the aggressive move. sending Howard--and Mather's two-bounce throw squirted out of McCann's grasp as Howard hook-slid into home.

Vance Worley replaced Bastardo for the eighth and promptly surrendered a leadoff single to emerging Phillie-killer Gonzalez, who moved to second on a Mather sacrifice. But he stayed there as Worley struck out pinch-hitter Eric Hinske and induced a grounder back to the mound from Prado to end the inning. In the ninth, Ryan Madson worked around a one-out walk to Jones, finishing it off by striking out Uggla as Heyward, who'd come in to pinch-run, stood at second base.

If this wasn't the best win of this young season, it was damn close: at virtually every crucial moment in the late innings, Charlie Manuel pushed the right button, and his guys delivered with clutch at-bats and superior relief work. 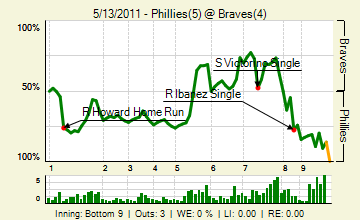